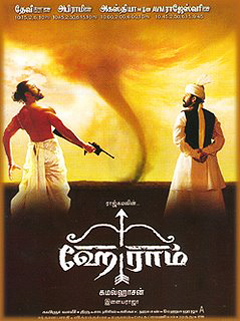 While exploring Indian Cinema (and more specifically: Rani Mukerji’s filmography) [1][2], I ran into Kamal Hassan’s outstanding somewhat-political religious epic of a man’s journey through friendship, love, hatred, revenge and redemption set around India’s Partition [1] and the assassination of Mahatma Gandhi.

Being pretty new to Indian film (and culture), I was bound to be ignorant in Indian history as well, so this was the first time I had ever heard of what had happened, the devastating destruction that literally tore the country apart. Other people’s reaction may seem similar to that of those who have no idea about The Rape of Nanjing [1][2], or imagine someone who doesn’t know about World War II or Pearl Harbor. Some films you must watch at least once in your life; Hey Ram is one of those.

Lying on his deathbed — shot in stylish black-and-bluish white — a very old Ram (Hassan in old makeup) reminisces about his life in 1947 India before the Partition, as people were looking for their independence from the British and a sector of the Muslim faction was looking to form its own state; the communal riots that took place in Calcutta (and other cities) engulfing the country in a string of extreme violence that tore families and friends apart.

Ram, a Hindu archaeologist working in some ancient ruins in Karachi (now Pakistan) alongside his friends Hindu Lalwani (Saurabh Shukla) and Muslim Amjad (Khan) get thrown into the cruel pits of hell when during the riots, Ram’s wife, Aparna (Mukerji), is raped and murdered by crazed Muslims of the community. Driven by rage, Ram goes on a killing rampage until he meets Hindu Shriram Abhyankar (Kulkarni), who will drive Ram into plotting the assassination of Ghandi.

Though I’m still an amateur when it comes to Hassan’s body of work as an actor, I’ve seen all of the films he’s directed so far and Hey Ram still ranks at the top personally.Whereas Virumandi does get into clan feuds and (sort of) communal disputes, and Vishwaroopam got into the Muslim extremist and jihadist aspect for a moment, none had dealt with the theme of revenge and redemption as well as this one did during its nearly 3.30hrs of running time almost devoid of musical sequence, which are integral to advancing the relationships between the characters when they were included. I particularly enjoyed the montage to Nee Partha Parvai [1][translation] that showcased Ram’s relationship to Aparna and what her death had done to him, despite Mukerji’s limited screen time. In fact every single role on this project is played to perfection — yes, even Shah Rukh Khan seems to avoid his classic over-acting [1] — especially Atul Kulkarni who convincingly attracts you to his character’s side despite our better judgement.

I’m one of those jerks that doesn’t believe in the pure good nature of people, so while I do think there are inspiring people in history, their idealized figure on mass media bores me to death. The fact that Ram was coaxed into believing Ghandi was to be blamed for all the riots was, to me, an incredibly interesting aspect that kept me glued for most of the running time.

Overall, Hey Ram is an incredible film accomplishment for its motives and the sheer scale of the project- a high class artsy masala movie, if you may, that deals with religious and political issues with action sequences, a bit of romance, measured musical numbers and melodrama, and yes~ a hint of comedy here and there. Its only hurdle… it does last three and a half hours. Taking the time to watch it is an investment that doesn’t quite rival Love Exposure, but an investment nonetheless.

If you have the luck… you can try streaming the film in EROSNOW.