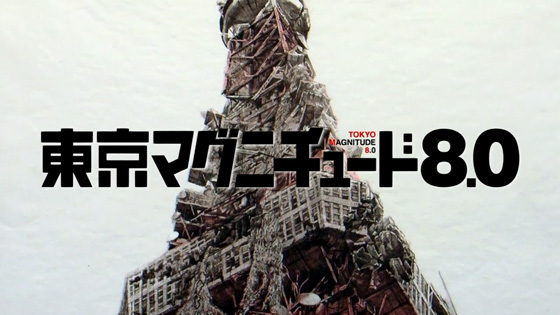 After watching Aftershock (which still is my favorite film of 2010 [1]), I seem to have found a new fascination for tearjerker disaster media. Aired in 2009, Tokyo Magnitude 8.0 never knew what it was about to chronicle, when nearly two years later a magnitude 9.0 earthquake [1] that shocked the world struck in Sendai.

In this 11-episode series, we follow a middle school student named Mirai (which means “future,” voiced by Satomi Hanamura), who is at that age where everything her family does embarrasses her or simply pisses her off- especially her mom (Kikuko Inoue) and her little brother, Yuki (Yumiko Kobayashi). After a spat Mirai has with her mother because she didn’t buy herself a “proper” round cake for her own birthday, Yuki asks his mother to go to a robot exhibition at Odaiba [1], but she’s unable to go so she asks Mirai to accompany Yuki.

Annoyed by the request, she unwillingly goes with her brother alone and while she’s with a long face throughout the journey, the massive earthquake strikes, causing enough damage to infrastructure in the city to scare the crap out of anyone- let alone two little kids stranded on their own. Luckily, Mirai (not so readily) and Yuki establish a relationship with Mari (Yuko Kaida), who joins their journey back home in search for her own daughter and mother.

While Tokyo Magnitude 8.0 — as a concept — is quite scary with its dramatic qualities, it wasn’t (surprisingly) a tear-jerking fest. It was a sad journey riddled with worrying elements, but very much like the reaction we saw on display on the news of the 3-11 Earthquake, quite calmed and paced. There were only two instances that struck those tear ducts with a full-on blow: one during Ep05 titled The School is Wailing, in which the kids alongside Mari take refuge in Mirai’s school, where they meet with an old couple who had lost their grandchildren in the disaster. While aiding those affected by the earthquake, the old man wishes that the disaster had taken him instead, which brought me back memories of those who let go as the tsunami was about to strike, so their loved ones could run faster to save themselves. The other episode was Ep10 titled Onee-chan, ano ne… (which basically translates to “Sis, you know…“), which spills out everything that had happened, and even though I felt a little bit cheated, it didn’t stop being emotionally strong.

While I did enjoy watching Tokyo Magnitude 8.0, it was too often that I felt annoyed by Mirai — who was referred to as “the cell phone alien” because that was the only way to communicate with her. It speaks a lot about how youth is being perceived today, and while she comes around by the end, I would only suggest children watch this with their parents, even if it’s not graphic, the sentiments that arise from it are complex and might need further discussion.

Also, as devastating the destruction seen on the introduction is, those are some gorgeous visuals in the opening.

You can get Tokyo Magnitude 8.0 on Amazon as a DVD set or a 2-disc Bluray.