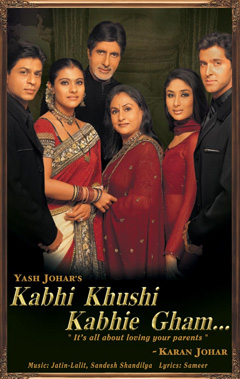 Well, Indian stories live up to the titles of their films, Kabhi Khushi Kabhie Gham…, which apparently translates to “sometimes happiness, sometimes sad” really contains moments of pure elation followed by moments to crush your heart — the story begins as simply as Indian films tend to begin: a young man gets home. Rohan (Roshan) has just gotten back home after boarding school only to find out that his big brother, Rahul (Khan), isn’t longer part of the family… and worse yet, that Rahul isn’t his brother by blood.

This is where we get into the whole story within the story [1] territory and Nandini, his mother (Bhaduri), tells us all the backstory. Rahul, as the eldest son of the family is naturally appointed to be the heir of the family business, he’s also set to marry whoever patriarchal figure Yashvardhan (Bachchan) chooses he should marry, and that’s Naina (Mukerji in a brief cameo). This is as telenovela as you can get, as Rahul meets the sassy Anjali (Kajol) and falls in love with the fiery energy that Anjali exudes.

However, K3G isn’t necessarily a romance as much as it is the journey of family love, as the conflict arises between Rahul’s father and Rahul for not accepting his father’s life as he planned it. It is also the crushing story of Rahul’s mother who’s left incomplete by the absence of her son. The whole build-up this received during the first half of the film (which lasts a whomping 3.5hrs overall) pays off BIG time in that moment Rahul steps into this London mall and his presence is sensed by Nandini. It’s a slow-motion sequence that apparently took a while to shoot because of the crowds gathering to see the shoot, but with the dramatic music and a pitch-perfect performance by Jaya Bhaduri, who is in fact the real-life wife of Amitabh Bachchan, it makes it the central part of the story. I like Shahrukh Khan and Kajol… especially her as the somewhat eccentric homesick Indian mother, but Bhaduri’s character and performance is what makes the film for me.

What I didn’t like is the detour we get when we get to see Anjali’s little sister’s, Pooja (Kapoor), life post-fleeing India, as her subplot and budding relationship with Rohan, even though their ganging up aids bringing the whole family together. Still, their musical sequences were much too filler content and added little to the emotional impact of the film. Moreover, though this doesn’t deter my enjoyment of the film, I also found the interaction between Yashvardhan and his desired-daughter-in-law-to-not-be a little eyebrow-raising. Come on! That has got to be some weird bonding between the two in the family-to-not-be musical number.

Though I don’t think K3G boasts of numerous iconic musical numbers like the other films I’ve been watching, except for the super sensual Suraj Hua Maddham [1] which is pure nonsensical geography against the backdrop of the Pyramids of Giza; the film’s strength relies purely on the family bond destroyed and rebuilt- all in the love of family drama ;P

There are several copies of K3G on DVD with English subtitles. Bluray looks likes it might come with subtitles | iTunes OST

You can also check it out on EROSNOW.