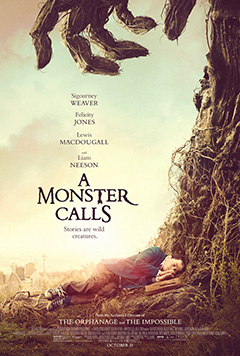 There are an incredible amount of films that come with a lot of baggage acclaim— movies that people rave so much about when they do their festival runs, that sometimes these never meet your expectation. Bayona’s ode to fantasy dramas, A Monster Calls, delivers; and then gives you some more.

The US-Spain co-production shares many themes with David Lowery’s Pete’s Dragon, focusing on Conor (MacDougall), who is dealing with the possible loss of his mother (Jones) to cancer, his stormy relationship with his grandmother (Weaver) and his absent father (Kebbell). Bullied at school, one night he receives the visit of a yew tree that springs arms and legs to become a full monster (Neeson), visiting at seven minutes past midnight to tell Conor stories that are wonderfully animated by Headless Studio and Glassworks Barcelona.

Each of the tales are supposed to help the boy understand good and bad, and that there’s a whole lot of gray areas in life that are difficult to deal with. However, none of this would sell — as amazing as those animated sequences are — without Lewis MacDougall’s delivery. He anchors the story and hits you right in the soul during his last dialog with Neeson’s monster, as he’s ready to listen to that fourth and final story. It doesn’t sugarcoat things, and his revelation might hit many in the audience like a bucket of tears.

Despite the fact that cancer looms over the whole movie, it never truly despairs, though it reaches higher levels of angst when dealing with both Weaver’s and Kebbell’s characters. Especially with Weaver’s grandmother character, who holds the most complicated relationship with the protagonist. My only complaint is that it does feel episodic due to the “I’m going to tell you three stories” nature of the storytelling, but I’ll let go of all that the moment it all comes full circle for Conor, his mother and her parents.

I loved it, it has a high chance of dethroning The Handmaiden as my favorite movie last year.

Except for Spain, who made A Monster Calls a total hit last year, the rest of us will know this as a cult classic for years to come.

There’s a really REALLY great detailed interview on CartoonBrew with Glassworks’ Javier Verdug, head of 3D, about the process of making the animated sequences and the special effects.