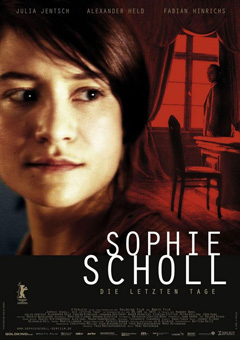 Interrogation movies are VERY hard to pull off, because there’s really nothing more boring than seeing two people (Jentsch and Held) sitting down in a closed room just talking back and forth, but that was basically how Sophie Scholl’s final days went when she was caught for distributing “anti-government” printouts during the not-so final days of Nazi Germany.

The first time I saw Sophie Scholl: The Final Days was in 2007 at the movies. I really had no idea who Scholl was, as she seemed a rather obscure hero of a very covered topic in school, where we learned that everything was A-OK after D-Day; Americans were the heroes that saved the world from the Evil Germans who were trying to take it over. Not even my mother, a history and World War II buff, had heard her name.

However, this vacuum of World War II knowledge didn’t deter from the movie (and historical) experience of watching Rothemund’s take on the interrogation records — in fact, it seems to make it even more interesting. This is supposed to be as close as it gets to the final days of Sophie Scholl as it can. It’s clinical and a little cold, which might turn off people for its narrative, or lack thereof. It chronicles the moments reaching a new low every few hours that passes by in Scholl’s life, at the same time that it builds her courage and heroism. A lot of the credit goes to Jentsch portrayal, and probably Scholl’s own personality. She never loses a beat and meets her interrogator, who sees as greatness as we do, without a hint of fear.

One of the most interesting aspects of watching Sophie Scholl was how this view of calm Nazi interrogations happened. The first thing that would come to mind when thinking of Nazis is destruction — concentration camps are a vivid image of what we imagine of the era. But much like our daily lives, a lot of the nitty gritty of life is kept at a distance. Nazi Germany was one heck of a clean and orderly place where everything seemed cold, not just the interrogation room in which Scholl was asked (in a civil manner) about her involvement in, what people perceived was, her older brother’s doing.

Production of the film feels right on target, despite the budget constrains that usually plague most European films, especially if they’re not co-productions — you would never even think about how they had to shoot bits and pieces in the few exterior shots to make it match the era. It’s effective, and you would never be distracted by such details. However, the most genius scene in the whole movie — besides the one where Jentsch uses her commanding tone against the judge that’s sentencing her to tell him that one day he will be standing in her place — is the simple walk to her execution, in which we just cut to black as we hear the sound of the guillotine falling. It’s chilling and haunting to think that that’s exactly what happened to the real Scholl, her brother and friend.

The best feature you can walk out with from watching Sophie Scholl, besides the newly found knowledge, is that you’ll probably want to read more about her and the White Rose group, which would make history teachers happy. This is a great educational watch!