City of Life and Death 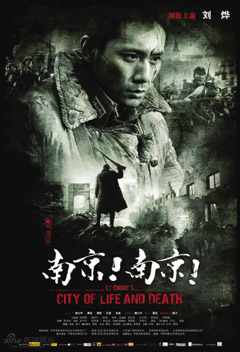 Nanjing! Nanjing! – in its original name – shows the dramatization of the Massacre of Nanjing and other events in 1937 during the Second Sino-Japanese War, in which the Imperial Japanese Army had just captured the then capital of the Republic of China. The massacre lasted several weeks, in which massive numbers of Chinese prisoners of war and civilians were killed. However, unlike many war movies around the world highlighting heroic acts, the film paints a crude reality for their main Chinese and Japanese characters.

The film, shot in black and white, already looks like a classic film for years to come, with gruesome war imagery that could probably compete with any action sequence in any big Hollywood film while having you in tears before the opening title appears on the screen. Though no character is truly evil, they are mostly presented as horrible human beings more concerned with raping females and thinking of going back home than the lives they are taking. Among these soldiers is sergeant Kadokawa (Hideo Nakaizumi), who is coming to terms with the violence surrounding him, and ultimately takes over his life.

The film’s biggest problem is probably its Chinese origin, meaning that a lot will be turned off by politics… or even sillier, subtitles. Do not miss the chance to see this, as it is raw with emotions and performances that will keep you thinking about the characters as real people.