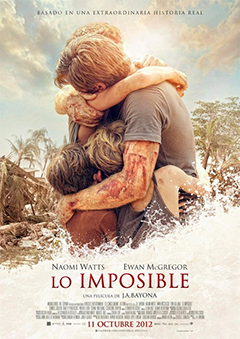 To say that Juan Antonio Bayona’s The Impossible was surprising is a bit of an understatement, but the sheer brutality and realism of it was truly unexpected.

The Impossible tells the story of Maria (Watts) and Henry (McGregor), who head to Thailand for Christmas vacation with their kids. When a tsunami hits and destroys the coastal zone, the family is split and must make their way through the immense devastation to survive.

Contrary to the seemingly overly sentimental dramafest the trailer makes it out to be, The Impossible is gritty as hell. The film starts off on a familiar and boring foot, but once the disaster happens, things take a fascinating turn. Too many disaster films tend to sugarcoat things in order to tell a story, but Bayona does not shy away. His experience in horror with El Orfanato is a big help here, as he and cinematographer Óscar Faura make the scenes where the tsunami hits absolutely terrifying. The make-up work is stellar, adding another layer to the horror and realism through some simple body horror techniques with the wounds these characters deal with.

Writer Sergio G. Sánchez, who also collaborated with Bayona on El Orfanato, brings yet another great screenplay. The two of these men genuinely know what atmosphere is all about and know exactly how to create a harrowing film. There is some sentimentality, as is definitely expected from a story like this, but it’s not something that hinders the sense of loss throughout. Grounding the film in this family provides characters we grow to worry and care about over the length of the film, and Bayona manages to keep the idea of overcoming disaster as universal as possible.

The performances that a film this tragic brings out of its actors is nothing less than an amazing feat. Tom Holland turns in an amazing debut performance as the eldest son and is able to hold his own in a film featuring brilliant work from Ewan McGregor and Naomi Watts. While the first portion of the journey is shared with Watts, who gives a devastating performance, when the film shifts over to McGregor, we see a man who embodies desperation. All this helps to keep the film afloat even when it slides into its few cliches.

Disaster movies never quite grasp the intensity of what people can be put through in these situation, and yet this one manages to stir something inside with its realism. With Spanish survivor Maria Belon’s true story to guide the film, The Impossible ends up being an impressive feature that makes one genuinely thankful that this inspiring story is the closest they will get to something like this.