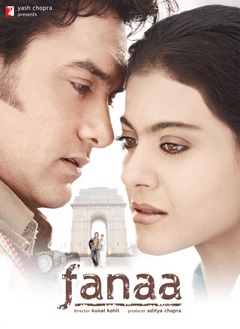 This review has been a long time coming. As you can see, I’ve been watching most of my actress biases’ popular by votes and best received filmography, including Kajol (only without counting those scattered cameos she did). I’m basically missing her pre-DDLJ performances and anything post My Name Is Khan.

So what did I think of her big screen comeback after K3G? Just like a typical Indian movie, Fanaa has A LOT to tell, despite being shorter than the now-regular 3hrs. of running time. On the first half, it tells the story of a blind young woman named Zooni (Kajol) who travels without her parents for the first time with her dance troupe for a performance in Delhi for Republic Day, where she meets Rehan (Khan), the troupe’s Delhi tour guide who doesn’t miss a beat when setting his eyes on Zooni, who unsuspectingly falls in love with him against the better judgement and nagging of her best pal Ruby (Gautami Kapoor).

Nothing works out for the best, of course, not even when Zooni ends up at the doctor who tells her that her blindness is operable with today’s advancements in medicine, because there’s a terrorist attack the day she magically recovers her sight and finds out her husband-to-be is no more. Or is he? After the intermission, Fanaa takes a nearly complete 360 with political and historical talk — that at my stage of Indian knowledge made just a little bit of sense — and family drama because now the suspected-dead and confirmed terrorist Rehan must choose where his loyalties lie… leading to, well… the kind of epic battle of guts that strongly resembles Eye of the Needle (1981) [1].

My main problem with Fanaa is… that I usually hate characters like Rehan. Full of himself and believing he could get any girl he liked as long as he set eyes on her — the performance has to be very subtle in a very exaggerated setting for me to let it pass, eg. Crazy, Stupid, Love. I literally couldn’t stand the first half of the film because of him — and in that sense I may be Zooni’s bff in the film — which made it impossible for me to care for the second half. I don’t know if it was Aamir Khan’s intentions to make him sleazy, but it got to the point of rolling my eyes when Kajol’s character gives herself to him — disregarding the Dekho Na [1][Eng subs] sequence. But I was told not to hold Aamir Khan accountable for this (or any of his previous work, because YUCK!– Dil and Raja Hindustani.), so I didn’t and found that I liked him in most non-Bollywood things with highlights to his collaborations with Kareena Kapoor (3 Idiots, and Talaash).

As far as Kajol goes, she had the bad timing of playing a blind character after Rani Mukerji’s fictional Indian version of Helen Keller in Black just the year prior, but there wasn’t anything inherently bad with her characterization but with the script and the direction of the whole project. It’s safe to say that Kunal Kohli is a terrible writer director, if Hum Tum and Thoda Pyaar Thoda Magic are anything to go by. Nothing against the masala genre, bu it’s as if the content in Fanaa was that of a masala movie but without the flare. Even this way though, the film has some decent music… the last pieces by Jatin-Lalit who have continued popping up throughout my Indian cinema adventure. I don’t believe the musical numbers fit well with the mood of the story, especially when getting to the Chande Chamke [1] number, but even Dekho Na (despite its character result) is a beautifully crafted song. Des Rangeela [1] takes the cake for the number that’s best included within the storyline without popping out of nowhere.

As a final side note, Tabu doesn’t get to spend much time on screen, but that’s where I eventually ended up. I’ve got over 20 movies of Tabu watched under my belt already.

Quarter of a star extra for Jatin-Lalit and Tabu.