South By Southwest (SXSW) is a mecca for up and coming musicians. It’s filled with music industry people of all kinds, from radio personalities, to tv show hosts, and label executives. With all of this possibility in and around Austin for the two week festival, it draws musicians of all kinds, shapes and sounds. It’s difficult to navigate the menagerie, but if you go in with a purpose like I did, you can manage to have a great time.

On the first day of SXSW I landed and went straight to the convention center to get my wristband, grabbed some food and went straight to K-Pop Night Out at the Elysium. There were already a ton of people in line waiting for the 7:00 show, and I arrived there around 4:30. I jumped in line and started asking who everyone was there for. Most of the answers were that they were there to see Jay Park and Hyuna. I was also surprised to find that most of the people in line were from Austin.

The line up for K-Pop Night out was Jambinai, Nell, Hollow Jan, Idiotape, Crying Nut, Jay Park and Hyuna. Jambinai is fantastic to see live – their albums don’t do them justice in the least. If you ever hear that they are coming anywhere near you, go see them, and thank me for it later. Nell was probably the biggest surprise for me. I’ve never been a fan, but their last song blew me away. Might be time to start checking them out a little more.

Hollow Jan was a lot more fun to see live than I expected. It was definitely fun to be in the crowd while they were performing. Crying Nut was SO much fun to see live. They fill the stage with their energy and enthusiasm. Idiotape really got the crowd jumping and they even did a re-mix of a Beastie Boys song. I left after they finished tho – I’d already seen Jay & Hyuna do soundcheck, and I was exhausted. So I checked out early, even though I learned my lesson – because Lady Gaga showed up and apparently stole the show after I left.

Highlight of the day: Hollow Jan. 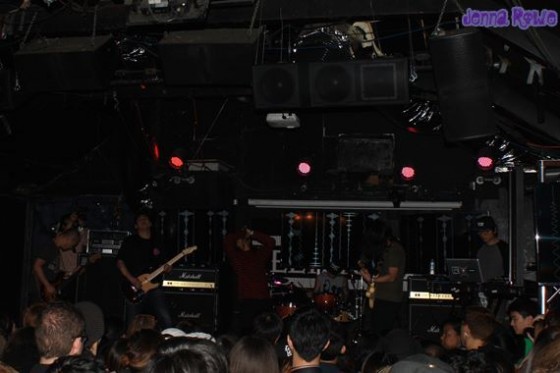 Hollow Jan was the underdog of the group of Korean musicians. They’re the only screamo band in Korea, and they fight to stay alive as a band because of it. The reaction of the K-Pop fans was delightful (I saw a full huddled in corners plugging their ears.) But there were a good number of hardcore rock fans that were excited to see them. They were the only group of the night to have “encore!” shouted at them. I’m not a big fan of screamo myself, but seeing them live cemented me into a fan.