Day two started with me heading to the MU:CON party that was arranged by KOCCA (the Korean Creative Content Association) and was meant to enable all the Korean acts of the year to be able to meet and mingle with members of the press & the music industry. It was an interesting experience, and I was able to meet with most of the bands, and catch a few extra performances.

Later that night I headed to Buffalo Billiards to finally see YB perform live. It was an odd choice for the band – a weird Texas wild west themed building that was more billiard hall than music venue, but then again – everything in Austin turns into a music venue during SXSW.

YB performed a great set. The entirety of their showcase was performed in English, I assume it’s to help promote for their English language debut later this year. They sang a mix of older songs like Stay Alive – but also have newer tracks like Real Man in there too.

Highlight of the Day: YB 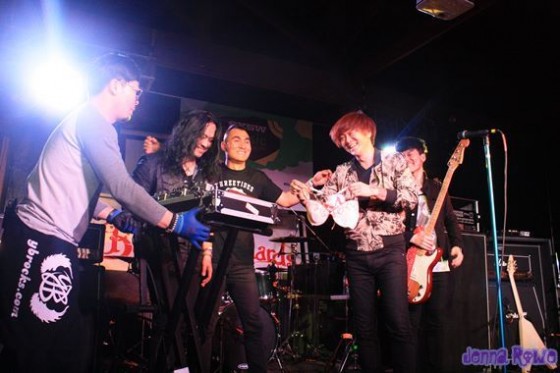 More specifically, the moment that some woman (never did see who) tossed her bra and panties on stage. Do-Hyun looked rather confused for about 30 seconds, then started laughing and called his bandmates over. They still managed to bow to us in thanks while holding said panties aloft. Priceless.