Saturday was rainy. Meaning getting around on a bike was pretty miserable. So I mostly puttered around inside until later in the evening when I wandered up to Antone’s Records to catch Crying Nut play their last show in Austin.

Crying Nut is probably my favorite live band now. They have permanent smiles stuck to their adorable faces and it makes for a great show. There’s never a dull moment for them either, with one or the other of them taking regular detours off stage to interact with the audience. It was while I watched them hop about the record store I decided that if I ever DID end up living in Korea, I’d be broke because I’d be going to see so many bands perform live all the time.

Highlight of the Day: Crying Nut being Crying Nut.

I’m glad I finished my musical experience of the week with Crying Nut. Nothing like ending on a positive note to make a trip feel worth while. 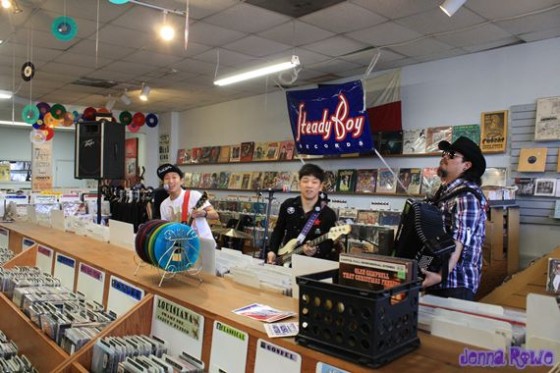 So, to finalize, if you are a fan of Korean music, and can’t manage a trip to Korea, just wait until next year’s SXSW. You’ll likely have another great set of Korean bands coming to enjoy, and maybe even more since the number of bands has been expanding each year since 2007. Of course, there’s more to SXSW than Korean music – but when there’s this much going on with just them – who needs it?