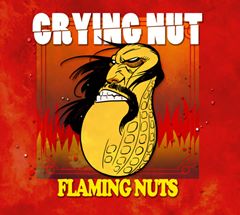 Crying Nut came back this year with their 7th studio album Flaming Nuts. It’s their first full studio album since 2009 (but they did release a joint album with Galaxy Express back in 2011). I’m glad to say they’re back, and yes the album is FIRE. I love everything about this album. It’s got a lot going on and they’ve got a lot to say. So let’s get on with the review!

The album starts off with a rip-roaring celtic-punk track, Pirates’ Passage. I was dancing to my surprised little feet at this addition to the album. I’ve never heard a Korean band throw in that much celtic flavor, kudos to Crying Nut for taking punk back to its UK roots. As a matter of fact, this album boasts a lot of different musical flavors mixed into it’s punk base. The track Give Me The Money has a ukelele melody and Summer has Crying Nut suddenly transforming into a Mariachi band. Flaming Nuts is a musical dance around the world, exploring sub-genre’s of punk most Western punk bands aren’t willing to go.

My favorite track on the album is the down-tempo acoustic number New Shoes. The plucky layered guitars, accordion and rhythm put me in mind of an old Spaghetti Western. It’s tracks like this that allow Crying Nut to stay free of the single genre box. While they are a punk band, they’ve also got the talent and creativity to push the boundaries of that genre. It’s great to see the band that paved the way for so many of today’s Korean bands still changing their game up and showing that they aren’t just one trick ponies.

While adventuring through a menagerie of musical styles, Crying Nut still managed to sound like the good ol’ punk band from their early years, just with a different twist. It’s great to see bands evolving and maturing, it means they’ll be sticking around for awhile. If Crying Nut keeps making albums like Flaming Nuts, I hope they stick around for a long, long time.

Preview the album on Xiami | Like it? Buy it on iTunes | or YesAsia