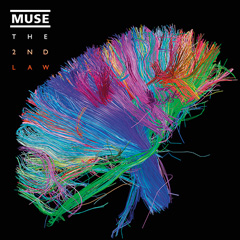 Ever imagined what a soundtrack album to George Orwell’s Animal Farm X 1984 might sound like? No? Fortunately, we have Muse — and their most controversial album thus far, The 2nd Law.

The Resistance turned out to be  futile, and now the “universe” (in a metaphorical sense) has fallen into the hands of a totalitarian power (which could also be interpreted metaphorically). As such, the trio has reached “the point of no return” — the only hope of Survival is to get up and fight back…

The Resistance is futile… The 2nd Law rules!

This statement could take many directions, depending on how much you like the album. It works for me, though. I especially love that instead of trying to outsmart everyone, Muse has surprised us all by adopting a “Surrendered — now what?” theme.

This also clears the clouds  as to why Survival would sound so “overcooked,” more like a theme for The Hunger Games rather than the London Olympics. I actually have a change of heart after listening to the whole album [1]. Survival, when put into context as part of The 2nd Law is NOT really overcooked. How unfortunate it was taken out of context as the Olympics theme. Whoever made that decision: Shame on you. You have misled everyone into not giving it the justice it deserved.

As Dom (drums) put it in an interview with NME Magazine [1], the opening track Supremacy is totally taken from a James Bond movie. Sounding a bit like Dead Star [1] at first with the heavy guitar riffs and drum beats, it bears resemblance to the band’s prototypical “alternative,” prog rock sound in the early days. If you’re a die-hard fan from their Origin of Symmetry era, you would likely love this track. I also suspect that it actually continues where The Exogenesis Symphony from The Resistance left off, given the use of strings and the orchestral transitions therein.

Ma-Ma-Ma… Madness — what an ingenuous track. While some may object to this because it reminds them of Depeche Mode and Queen, you can’t possibly disagree that “ma ma ma…” is now stuck in your head to haunt you for some while. And it has more use than that. From a music theory perspective, it establishes the pulse for the entire song — not to mention how clever Matt is in stretching the “ma ma ma” throughout — closing with “ma ma ma… Madness.” This posits the whole song as one big state of madness, beginning with memories that “I” (Matt) can’t get “out of my mind.”

Follow Me is a piece of candy for those who love their Black Holes and Revelations. It resembles the icy-cold Endlessly with its electronic beats on the synthesizer. As it develops, the song evolves into a more mainstream (though still electronic) sound like that of Pet Shop Boys. While Explorers has the innocent feel of Soldiers’ Poem, which is amplified by the crystal-sounding beats of the vibraphones and piano. This almost fairytale-like tune plays the role of neutralizing the mounting intensity that has been built up to this point. And this explains why it is placed in between the first and second halves of the album.

Panic Station sent me… to a state of panic. Upon the first few bars, I was struck by how similar it is to the Bee Gee‘s Staying Alive. Not a… big problem — until Matt’s vocals join in. While he deserves some credit for trying out a personal new style with the explicit “F words” here and there, something is just not quite right with his tone. He got the rhythm, the notes, but unfortunately not the feel nor the spirit of this funky rock track.

With Save Me and Liquid State, we get to hear, for the first time, Chris (bass) doing the vocals for his own songs. Not bad for a “first-timer” —  just that his voice pales in comparison with Matt’s famously sexy and charismatic vocals.

The 2nd Law: Unsustainable. This “baby” is a hybrid: the first half is a little disastrous, sounding cliche and dated like a soundtrack for a B-list Hollywood thriller… from the 1990s. But then the latter half sounds awesome with Matt’s signature “experimental” guitar riffs. They also serve to create the kind of deadly but irresistible gravity as that in Supermassive Black Hole [1].

Overall, this album sounds a lot more daring and experimental than The Resistance — a pleasant surprise indeed. It is not another Black Holes and Revelations, but then… I wouldn’t want to see Muse getting complacent with a wildly successful album from some six years ago either.

Apparently, this is what’s going on in Matt’s mind as well.

Preview on Xiami | Like it? Buy the album on Amazon