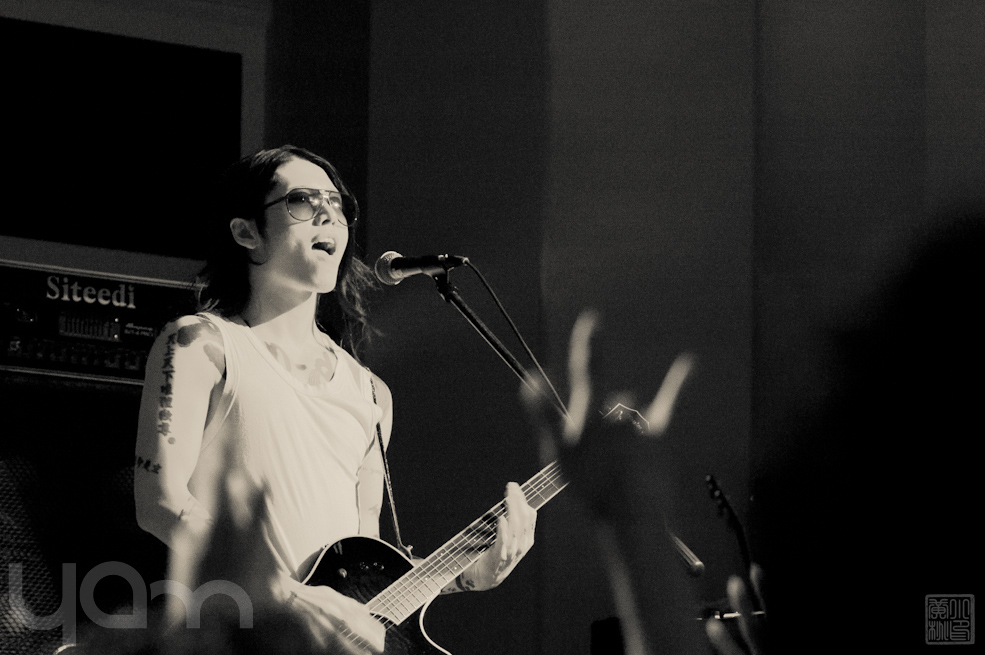 I have been spoiled by other acts I have photographed, but I knew I had to get my best gear to shoot Miyavi’s gig. Hence, this is my first time adhering to the “first two songs” rule that plagues proper concert photography. I was actually worried I hadn’t gotten enough good shots when the time was up.

Miyavi attacked Peru’s capital city, Lima, after attacking Caracas — capital city of Venezuela, for those sucky in geography — just the night before. The expectations were high, and the energy was abuzz for those lucky ones at the show — among them, a couple friends from high school because we’re totally a niche.

It was Miyavi’s first — he popped his Peru cherry. And he didn’t disappoint.

The MYV crew went nuts even while waiting for the show to start, screaming at every skinny, Japanese figure that made its way onto the dark stage to fix anything on it. I personally couldn’t sleep the night before from the eagerness to watch his show live. We never get to have as cool an act as the Samurai Guitarist — and man! Watching Miyavi play the guitar as if his life depended on it was a thing to behold. As skinny as he is, and as normal as he looks now that he’s a father, he commands that stage like nobody’s business.

He jumps from one side of the stage to the other. There were three mics set up for Miyavi to do whatever he wanted, but he really made use of them midway through the show. He went at them like a mad man shaking his head, making his long hair flow. His hair created amazing shapes with the light against it that I would have loved to photograph!

I would have loved to photograph so many parts of that show.

When he finally made it to my favorite Miyavi style and switched full on to his Samurai mode, he was joined by his drummer, Bobo, who attacked that drum set as if he were in a Kendo fight for his life. I mean, I gotta admit that I have a slight bias for Selfish Love [MV]. After all, Miyaviuta ~Dokusou~ (雅-みやびうた-歌～独奏～) is my favorite of his albums, so I just went all out and sang to We Love You ～世界は君を愛してる ～in my wonky Japanese, “Sekai ha kimi o aishiteru.”

Miyavi’s live show sounds on par or even better than his studio albums. One thing is certain, he offers the goods. His voice sounds exactly like how you’ve heard him on audio or seen him on those YouTube videos. Raspy, and with a whole lot of fucking fucks. He even learned more than the necessary “gracias” to ask us whether we were having a good time, to introduce himself as Miyavi, and told us he loved us.

By the time the show was almost over, after taking his shirt off to screaming lady fans — or maybe just fans in general — and then putting on the always-present Peruvian soccer team shirt customized with “MIYAVI 382”, there was some waving of the Peruvian and Japanese flags. As Miyavi said, Peru and Japan are so far apart from each other, yet events like these filled with music and energy make those barriers go away. We Are One.