small o – The Temper of Water 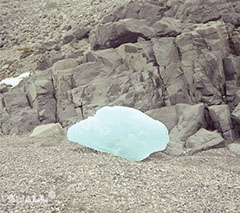 I wanted to write this review while the taste of the music still lingered on my tongue. So without much ado, let’s get right to it. small o, a Korean band comprised of former members of band Easter Sidekick, created one of the richest, most inspiring albums last year. The Temper of Water is a masterpiece, heavy and thick with emotion yet light as silk on the skin. Each song built upon the one that came before it, yet every track left its own unique signature on the soul well after it ended.

There’s a subtle sensuality to the music, something rugged and alive that sticks to the fingers. small o doesn’t try for a sound that will align itself to what most people associate to the idea of “indie.” Rather they are musicians that create and nurture music, giving it room to grow, breathe, and live.

Songs like Crow and Into the Wild spiral and build, being at once the fruit of the earth and the finer points of Heaven. Then there are tracks like Catcher in the Rye and Bleak Season that have an emotional purity about them. There isn’t inherently much to the tracks, but the weight placed on each note, each word sung impacts the listener just as seeing the sunshine for the first time after a while or perhaps feeling a lover’s embrace after a long day.

This album is a full-sensory experience. As with those moments that are fueled by emotional heaviness, there are lighter moments that give the listener room to breathe, and the air’s so uncorrupted, so pleasant it puts a smile on the face. That’s what much of this album is about: experiencing the simplicity of life, and also being gifted with life’s richness. Track That Will Fall is a celebration, a bit of gratitude to the universe for allowing us to share its simple joys. Then there’s track Elephant, an experimental masterpiece that’s at first a lovely mid-tempo number, then morphs into a more sonically rich track a la Into the Wild.

The Temper of Water balances all these elements, giving us an album that’s almost arrogant in how grand it is yet still revels in its simplicity. It’s as broad in sonic scope as it is unpretentious in its earnestness. Lead singer and guitarist Oh Ju-hwan’s voice is the thread that keeps this album together, the sound delicate yet incredibly strong—much in the way a spider web is intricate and soft yet sturdy and powerful. His melodic coo drives the album, and gives each song an ache and tremble that outlasts even the magnificence of the musical composition.

small o is classified as “folk,” but that drastically overgeneralizes exactly what the band’s about. If we take “folk” to mean music directly from the mouths and hands of the “common” people, then small o is indeed one of the genre’s most genuine proponents. The music is emotional, honest, and pure. It’s folk in that it’s completely and utterly human, with all the quirks, sadness, happiness, and unpolished elegance of humanity. What this album did was find a way to tap into what makes us truly human (our temperament) and beings of the earth (water) and create a sound and concept meant to illustrate us as our purest selves.

The Temper of Water left me full. As the final notes faded, I remember thinking how peaceful everything around me felt, and I was completely content. There isn’t a band like small o, and I hope with the release of this piece of absolute serenity the band finds it within themselves to bring more of its beauty to the world.

You can listen to the album at Xiami. You can purchase the album on YesAsia, iTunes and Synnara.