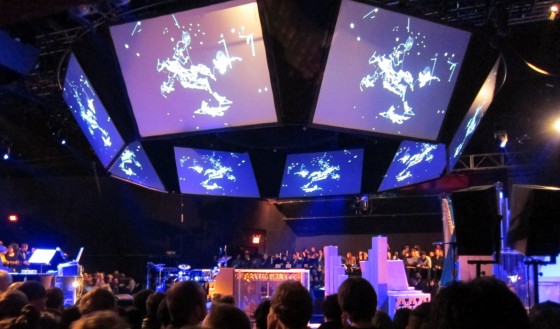 Other than the suffix -logy, there hardly seems to be any linkage between the two.

Not quite so — especially if we see them through the lens of Bjork’s Biophilia Live.

Keeping in spirit with the title Biophilia, the overarching theme of the concert was the idea that there exists an instinctive bond between humans and other living systems.

But then Bjork wouldn’t have become the Bjork we all adore if she had been satisfied with just that.

Indeed. Our Icelandic diva not only connected the two entities through the enchantingly enigmatic  musical performance she rendered — but she also took it to the next level by calling upon Mother Nature to be the source of power fueling this organic mechanism — with her audience all being the prime witnesses.

But how on earth did she manage to accomplish both in a live concert?

A second look at the concert setlist above would unravel such thoughtfulness and depth inherent in the whole Biophia Live concept. Feeding on Thunderbolt and Moon, the human race not only survives but also prospers intellectually (as suggested by Dark Matter). And yet, this by no means implies that we are superior to any other living organism: we are vulnerable all the same given that our existence, for one,  still hinges upon the state of being of various Virus systems, both the good and the bad, living inside our bodies. Where is the Line that sets one living form apart from another, considering how symbiotic and mutually reciprocal the relationship is? While technology may come in handy as a potential answer to the question, Bjork ended the night with her own “Declaration of Independence” (Declare Independence) as a wake-up call for her beloved audience.

That’s all from the theoretical side of the Biophilia universe. How did she fare in the technical department, though?

Musically and performance-wise, this concert was highly original. Have you even thought about using a bunch of iPad 2s to accompany more “traditional” instruments from drum sets and electronic synthesizers all the way to the harp and the harpsichord? What if this was all integrated with the dancing and singing of a 30-member chorus, who would harmonize in styles ranging from that of the Baroque Period to that of electronic dance beat? This, to me, somehow made Bjork’s own quirky but funny blue costume pale in comparison. 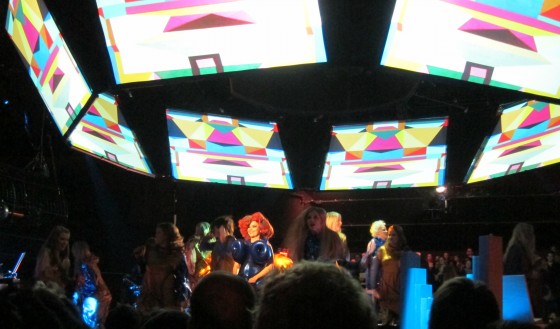 Now, the killer moves. This was how Bjork managed to bring Mother Nature right before the audience’s eyes — literally: while it is beyond my capabilities to present to you the actual electricity/lightning generator used alongside the opening number, Thunderbolt, here’s an official video of a Biophilia app that might give you an idea of what it was like:

Another move was the animation videos showcasing the world of microorganisms, mechanisms within human internal organs,  and even human DNA down to the very detail. These videos vividly conveyed the idea of one life form embracing, embedding, and/or counting on many other living systems for existence.

You might want to get a glimpse of such powerful visual effects through the music video of Hollow:

True. You may not buy the somewhat bizzare Biophilia hypothesis for intellectual reasons even after watching Bjork’s performance. But I can assure you that this might as well be the most worthwhile money you have spent on any live concert(s) — ever.