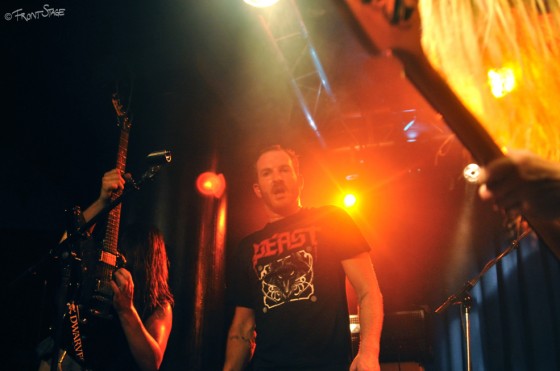 I will admit it, punk isn’t really my thing. It feels like the development of punk music has become somewhat populistic, and the “f**k you, I don’t care if the guitar is broken” ways are long gone with bands like Green Day and Offspring.

However, when Giesagöbbels got up on stage and played, you couldn’t help but gave in to the extensive headbanging of the rest of the crowd. The Giesagöbbles played hard and fast in front of about 70 screaming people at the Nalen Klubb (club) stage in Stockholm. The small basement-looking club fast became an inferno of hair, leather and sweaty men closely pressed together in the chaotic mosh-pit.

Giesagöbbels plays a type of aggressive turbo punk, all together with basic rock influences. Most of their songs were about two to three minutes long, but in that time they managed to deliver more energy than any other band could have during their whole show. It is easy to see that the band enjoys being on stage — at one of the few guitar solos, Tim (lead singer) went back and lifted the drummer (Adam) up to release him over the crowd.

Giesagöbbels was created by guitarist Peppe and Adam (drums) about a year ago. For an explanation to the name Giesagöbbels you have to look in a Scottish dictionary, preferably a dirty one. Through their 12 month history, the band has attended different festivals and stages. Most recent they played at the Swedish festival “Ta livet I dina egna händer” (editors trans: “take your life in your own hands”) and got great reviews.

During the 25 minute long show they managed to play nine explosives songs. Many of the songs differ from one another in meaning. The song Collage for Knowledge is, for instance, about the criminal justice system while another song is about tuning your guitar just the right way (Give me an A). According to Tim, who writes many of the lyrics, their often very “cheeky” lyrics are inspired by the motorpunk band The Dwarves.

The band is currently looking for a record company to release their singles this October.

All photos by Peter Andersson/Frontstage Photos.