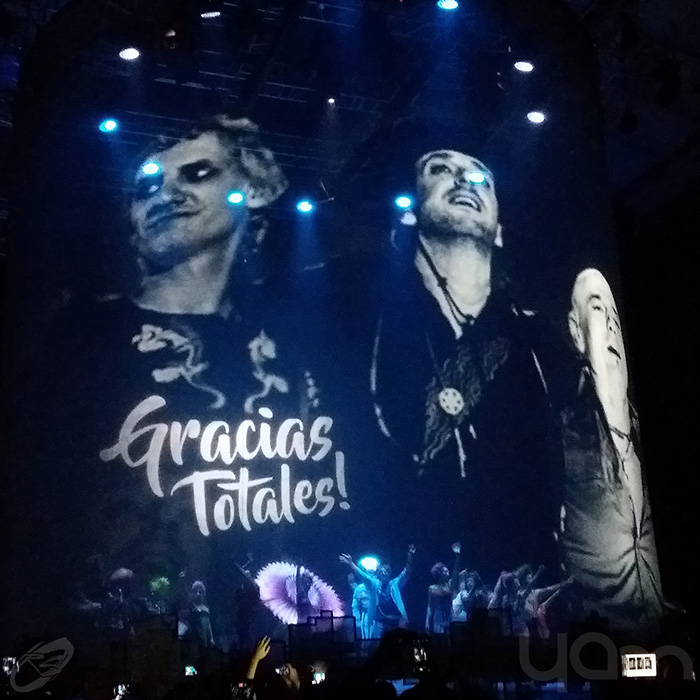 The latest Cirque du Soleil production, themed around the music of legendary Argentinean rock band Soda Stereo, arrived 10 years after Soda reunited and did their final tour Me Verás Volver. Wildly beloved in Peru, and still missing the late Gustavo Cerati, Soda fans got their tickets ready to be marveled with the theatrical value that Cirque du Soleil is known for, and reliving Soda’s songs. Not only were they remixed and remastered by Charly Alberti and Zeta Bosio themselves, but the Séptimo Día song finally got its official music video long after the band wasn’t active anymore to hype the upcoming spectacle. However, being able to witness this in Lima took a week longer than expected.

Due to the borders between Argentina and Chile being closed due to climatic issues, the technical equipment necessary to make the show happen wouldn’t arrive on time, and production company One Entertainment had to reschedule dates for the shows [1]. This unfortunately screwed up some of the people who had bought their tickets and couldn’t find any other dates for different reasons, which explained empty seats on the rescheduled shows. Lucky for me, this worked in my favor because a friend got me a spare ticket for the afternoon show on June 30 (original date: June 18, 2017), just hours before the show took place. As to why I didn’t get a ticket before, I just assumed they sold out fast.

As far as the show goes, the co-direction of Michel Laprise and Chantel Tremblay displayed a visually futuristic ride that blends very well Soda’s catalogue, with the artistic and acrobatic stunts that Cirque du Soleil performs for the most part — I’ll admit there were a few occasions where it seemed like Soda and Cirque wouldn’t mesh too well. Anyway, the show began with the voices of Gustavo, Charly and Zeta welcoming the fans to the show, letting them join their inner triangle. Later, a young man known as L’Assoiffé put on a big pair of earphones, jamming to Juego de Seducción and Séptimo Día while being lifted in the air, bringing out all the 35-37 performers pulling off stunts and visuals of all types for nearly an hour and a half. To bring up more of it would ruin the experience, but in case you want more details about what goes on in Sép7imo Día, read that here.

Word of advice for those attending the upcoming shows in Chile, Colombia and Mexico: if you bought the stand-up tickets, have fun dancing to the songs and jumping around, if you get ultra pumped, but also get ready to walk and move around during certain parts of the show. Equipment (i.e. the big wheels) and performers do appear at certain points of the show and you have to give them space to let them perform, as seen in the opening act and songs such as En Remolinos, just to cite one example. That makes up for a pretty unique and dynamic live experience, I must say.

For me, it was a highly entertaining show, well worth the time. It serves as a nice reunion with Soda Stereo — if you attend opening day in the city/country, Zeta Bosio and Charly Alberti will be there and it’s even better — not only working as a tribute to the band, but it also solidifying how great Cirque du Soleil shows truly are. They have done tribute shows before for the likes of Michael Jackson and The Beatles, but tackling Soda Stereo is a different beast and they pulled off a very fun show that’ll be hard to forget.

Curiously enough, the number 7 is always present in Soda Stereo. In 1987, they were conquering South America. In 1997, they said goodbye… only to reunite one last time 10 years later. And now in 2017, we get this show. Will we get something for 2027? I hope so.

More information about the show can be found here.