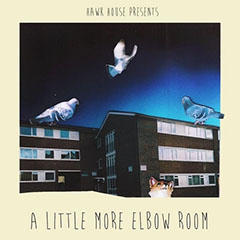 2013 in hip-hop was actually quite a fantastic year. Veterans and newbies alike released full EPs and mixtapes that have put the previous five years to shame. They came hot and thick from all over the world. Not too surprisingly one of the best mixtapes released last year came from Great Britain. Hawk House has been on the horizon, due for release for the last few years. Under their previous moniker A Yellow Man, they released a single in 2012, but hadn’t made good on the promise of a full album until last year’s A Little More Elbow Room. The group is like a throwback to groups like Digable Planets. Members Sam, Eman, and Demae create a sound that’s smooth, luxurious, and some of the sweetest hip-hop I’ve heard in quite some time.

A Little More Elbow Room is a journey, something deceptively soft that seeks to ease the mind before it enlightens it. It’s everything you’d want from a mixtape — immaculate lyricism, flawless flow, and a warm embrace of the audience. Opening track Quantum Foam resembles something Lapalux would create. It’s sultry and angled, reminiscent of the softer tones of the British producer’s track One Thing. The song bleeds perfectly into Live-ation, the album’s second single. Just as the video, the track is smooth and comfortable.

The mixtape continues in this vein — simple yet elegant and inviting. Lead single Tidal Tendencies is a glorious track that is wrapped in Nujabes-like jazz and even more powerful lyricism. It’s absolutely the perfect vehicle to bring the group to the public consciousness. But, quite honestly, any of these tracks could’ve been released, and any one of them would’ve made an impact. For instance, track Pause would’ve been just as impactful. The edgier music is slightly more powerful and delivers more of a concentrated punch, vocalist Demae adding her layered vocals between profound lyrics:

It’s like a planned assignment when writing these lines decided.
We’re a band of pirates, not your average pilots.
And it’s guidance we’re sharing, appearing on your land’s horizons,
arising from smoke and bringing gladder tidings,
tying up those loose ends.
Recording choruses, words important, it’s goods imported,
pouring these words for the listeners like we’re news reporters.
Moving forward with no playing around, we’re not used to pauses,
but if we pause, then it’s only to hear when truth is calling.
Move according to it.

And that’s only twenty-five seconds. It’s obviously hard to pin down a single lyric that prevails. Each word is necessary and wrapped effortlessly around the other. And the music…? It’s some of the most flawless production I’ve heard on an album after 2000. The lyrics meld seamlessly with the music that surrounds it, as if both were conceived in the same mother, fraternal twins that share thoughts and emotions but come in a slightly different package.

A Little More Elbow Room is interspersed with short musical interludes that are named after colors: Aureolin, Plum, and Turquoise — yellow, purple, and blue; however, these permutations are more concentrated with color, richer in hue as the songs they’re named after. The yellow is brighter, the purple darker, and the blue clearer and more glittering. The tracks that pillow these interludes are just as saturated with meaning and color, each one full of something special lyrically and musically. The album’s title makes sense. There’s so much packed within the thirty-three minute confines of this mixtape, it’s almost as if there’s just not enough room for it all. But no one would ever complain about the cramped quarters.

Listening to Hawk House is like dipping into the past and finding the simplest, most uncorrupted bits of hip-hop from the early 90s. Their sound is fresh, crisp, alive. This group of talented young emcees is a welcome addition to the genre, bringing something a bit purer than what we’ve been used to in the last eight or nine years. I sincerely hope there’s more of this in the future. We could all do to be locked in a tight space with music this incredible.

You can listen to and download A Little More Elbow Room at datPiff, Sphere of Hip Hop, and Rapzilla.