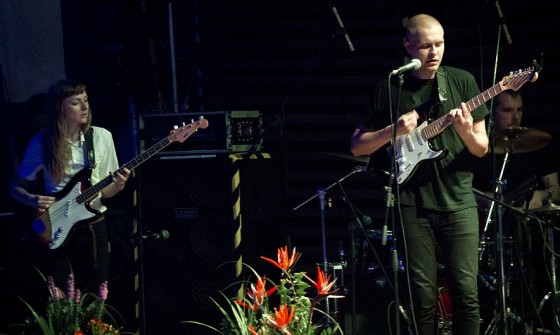 As much as the crowd had fun seeing Motorama live — they bring back memories of Joy Division — I’ll start off with the bad aspect of their first ever concert in Peru: they got off to a bad start due to technical glitches, but they still worked well thanks to last minute fixes and a very energetic crowd. The saddest part of this problem was that the Discoteca Mango’s crew and organization wasn’t able to fully prevent this after it happened first with opening act White Llamas, which led to their performance being cut short after their fifth song while Subway Elephant, the second opening act, was axed to give the Mango’s crew time to fix everything before Motorama showed up. Even if you don’t care about opening acts, you have to feel bad for them. Anyways, Motorama was advertised to play at 11:00pm, but the concert started half an hour earlier, screwing some fans who planned to only see them.

While Northern Seaside suffered due to frontman Vladimir Parshin’s microphone not working that well, the rest of the concert fared better and not only due to the band being fun to watch live — watching the guys dancing and moving with their guitars is cool and cute [see: bassist Airin Marchenko] at the same time — but the crowd was pretty energetic following  To The South and that’s not something I’d say for most Peruvian crowds regardless of venue size. It’s granted that almost everyone in attendance knew of the band either through Radio Doble Nueve *raises hand* or the Internet, so it shouldn’t be surprising to see devoted fans . Considering my country and my experience at most concerts, it is still a big sight.

Highlight song performances also included Young River, Rose in the Vase, Ghost and Alps — the last two got the strongest reaction of the night. For almost every song Motorama played, the fans were jumping, dancing and singing around. The band delivered, even if they felt a bit frustrated by the technical problems that harmed the show, especially Vlad and Airin, the latter wasn’t that visible due to lack of lighting surrounding her later on. However, the fans were great and made them feel very welcome in Lima with several “Motorama” chants and echoing the guitar sounds/solos.

Here’s hoping that the upcoming concerts for the Peruvian tour — yep, they’re playing tonight at Discoteca Nébula and tomorrow they’re heading to La Oroya — doesn’t suffer from the same sound issues that Motorama suffered at Mango’s. Their repertiore is great live and they provide lots of energy to their fans. On the other hand, this might be the worst concert organization experience I’ve witnessed live.