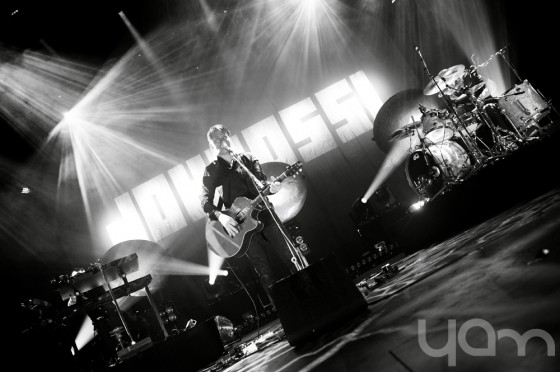 Johnossi, the Swedish rock duo, is made out of guitarist John Engelbert and drummer Oskar “Ossi” Bonde. It has been about seven years ago since they released their first album, Johnossi, and they have done a great job making their mark on the Swedish music stage. Their type of Krautrock [1] and their massive energy shown on stage have gained them ground in countries like Germany and Austria where they have toured a lot. Their latest album, Transitions, has been given great reviews by the critics and they are right now touring Sweden on sold out arenas before they head out to play this summer’s big festivals such as the Peace and Love Festival (Sweden), the Southside Festival and the Hurricane Festival (Germany).

This night, they played at the Circus venue in Stockholm, where the tickets were basically sold out to people of all ages that had abandoned the first sunny spring day outside for this indoor concert. Every time I listen to Johnossi’s music I am surprised how much variation they can add to their song with only a guitar and a set of drums. On the other hand, I have never in my life seen so many effect pedals under a microphone where John was standing. The effects coming from, what looked like, his semi-acoustic wooden guitar makes Johnossi’s music sound like a normal-sized rock band.

The tempo was set high, playing the new single Gone Forever and last year’s hit Whats the Point? pretty early during the show, which contained a nice mix of new and old songs, making the audience jump up and down. It was hard to get a steady shot of the guys with the camera — but that kind of challenge is just amusing. They had a relatively high tempo during the whole show, but during long episodes of the concert they never spoke to the audience, and I feel that this could have made the show even better; it definitely would have made the show a bit more personal. However, I haven’t seen Johnossi play that many times, so it’s hard to compare their connection to the audience with anything else.

All I know is that I really like their music, and I hope that they continue delivering high quality songs like these in the future.