By now, I think it’s almost clear how Game of Thrones works. Or maybe not, considering the unpredictability of certain events surrounding the book and tv show. As far as the show is concerned, the following points are true:

1) No one is safe and that has been clear since the final events of the first season.
2)  Every season so far has climaxed huge by the penultimate episode.
3) As always, there’s lots of slow build-up throughout every season that leads off to big payoffs for most of the characters and storylines.

Season 3 is no exception to these rules, but this time it is definitely a lot more slower to watch than the previous two seasons in terms of plotting and pacing, yet still very engaging to watch. As always, the show focuses on lots of characters (old and new), but most of the attention goes towards the Lannisters and the Starks.

In King’s Landing, most of the Lannisters are living fine, except for Jamie (Coster-Waldau) and Tyrion (Dinklage), the latter being scarred from the Battle of Blackwater and his dad Tywin (Dance) takes all the credit for winning the battle instead while also being the one who is really in control of King’s Landing despite Joffrey Baratheon (Jack Gleeson) being the King. Tywin’s scheming to keep things under his control works in a way that benefits his political interests and makes him come across as a highly antagonistic character in superb fashion. His actions also have an effect against other characters, including his sons Tyrion and Cersei (Headey), Tyrion’s whore-turned-lover Shae (Sibel Kekilli) and Sansa Stark (Sophie Turner), who is still stuck with the Lannisters and gets forced into a political wedding.

As far as Jamie is concerned, he is still hanging around with Brienne (Gwendoline Christie) as she escorts him back to King’s Landing in exchange for rescuing Catelyn’s daughters. However, complications happen when they are kidnapped, which isn’t a good thing for Jamie.

Elsewhere, Robb (Madden) and Catelyn (Fairley) are still working out their quest to avenge Ned’s death. While Arya (Maisie Williams) is trying to find her way back home to see her family and Jon Snow (Harrington) gets stuck with the wildings — leaded by Mance Rayder (Hinds) — and develops a relationship with Ygritte (Rose Leslie), Bran (Issac Hempstead Wright) and Rickon Stark’s (Art Parkinson) group — including Osha (Tena) and Hodor (Kristian Nairn) — gets expanded as they’re now joined by brothers Meera (Ellie Kendrick) and Jojen Reed (Sangster), who are heading North with them and the latter helps out Bran on dealing with his visions.

Season 3 also focuses on non-Stark/Lannister characters as Daenerys (Clarke) is getting the grip on how to be a leader and her army gets a major upgrade thanks to her now grown dragons, who are influential in her expansion. Stannis Baratheon (Dillane) tries to recoup from his loss at Blackwater along with Melisandre (van Houten) and Ser Davos Seaworth (Liam Cunningham), who clashes often with Melisandre’s views and influence over Stannis. Night Watcher Samwell (John Bradley) splits from Jon Snow as he helps out Gilly (Hannah Murray) with her baby and serves as one of the witnesses of the reapparence of the White Walkers. 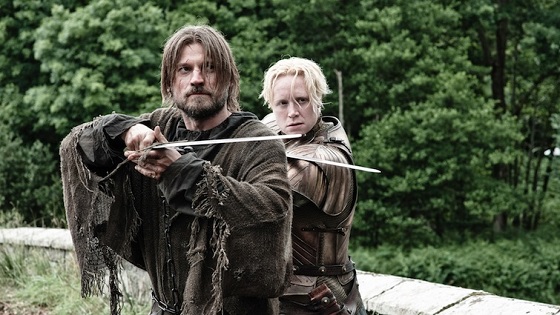 There’s a  lot of things happening in Season 3 and this is only just the adaptation of the first half of the third book, which explains why things seem slower in terms on layering out the storylines. Game of Thrones shines strongly in its third season thanks to its outstanding cast and great storytelling and feels a bit less dizzier to watch than the first two seasons, but it does suffer at times from uneven pacing — partly due to splitting A Storm of Swords in two seasons, partly due to screenwriting plotting — and the occasional focus on uninteresting things, which includes time-killing conversations and checking on Theon Greyjoy (Alfie Allen) getting constantly tortured beyond belief (that got stale fast) as well as seeing the slow-paced expansion of Dany’s army (although it had a nice payoff in the final minutes of Season 3, even if it made her look like Abraham Lincoln).

While lots of standout moments happened thanks to the direction and acting, Season 3 had some great character pairing that made  certain characters look better than they should have been. The likes of Samwell and Jon Snow were performed decently by their respective actors, but their female pairings fared a lot stronger and made them more watchable (Rose Leslie was stellar in Season 3), but I can’t say that for the Robb Stark and Talisa pairing sadly. As far as the rest of the cast goes, Peter Dinklage, Charles Dance, Michelle Fairley, Lena Headey and most of the cast are their good usual selves, but nothing comes close to the Jamie and Brienne pairing, which was easily my favorite thing of this season. Nikolaj Coster-Waldau was easily the best supporting actor Game of Thrones had in Season 3 and this was on his own merits — he made Jamie’s humbling path work like a charm, had amazing chemistry with Gwendoline Christie and he eclipsed nearly everyone in the cast except for the Red Wedding event, which was a bit more of a “shock value” thing rather than the horror described in the third book, but still impressive for television anyways.

All in all, an outstanding season that is an improvement over Season 2. Definitely looking forward to Season 4.