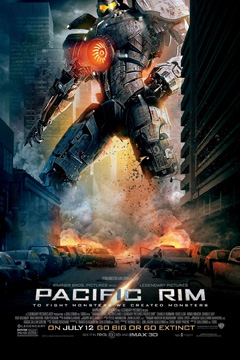 It’s not hard to see why lots of people are lining up to see Pacific Rim on the big screens. After all, who doesn’t want to see giant robots and monsters beating the shit out of each other? Under the hand of Guillermo Del Toro, I’m glad to say that Pacific Rim is not only a hell of an spectacle, but it’s also a very solid film for the not-so-good 2013 summer film season.

From the start, Pacific Rim establishes how the battle between mankind and Kaijus — Japanese term for “giant monsters” — began and how things are done from both sides throughout the entire film. Right after the Kaijus made their first appearance, the human built giant robots — known as Jaegers (German term for “hunter”) — and gained the upper hand for a good amount of years… that is until we reach the year 2025 and the Kaijus have gotten much stronger and they’re about to put the Earth into extinction. This leads Marshall Stacker (Elba), the man behind the Jaegers protocol, to recruit former Jaeger pilot Raleigh Becket (Hunnam) to make a last stand against the Kaijus and use his former Jaeger machine alongside Stacker’s protegeé Mako Mori (Kikuchi).

It’s a race against time and Kaijus for the world’s salvation.

From a visual standpoint, Pacific Rim is downright amazing. I know some of you guys could easily dismiss this as a Transformers vs Godzilla film and I can see why, but it’s more than just that. Watching the Kaijus and Jaegers brawling is actually epic — this is how you use that word, Internet people — but Del Toro actually makes you care about the human characters involved in the Jaeger program from start to finish… or most of them anyways. Idris Elba is great as Stacker, the former Jaeger pilot who has had the weight of the world on his shoulders for many years and always remains super serious, yet admirable at the same time. Interestingly enough, both Becket and Mori have to cope with family losses that makes them highly compatible for managing the Jaegers and this leads to the inevitable romance angle, but it nicely doesn’t go into sexual territory at all thanks to how Hunnam and Kikuchi handle their characters.

There’s also the father-and-son duo in Herc (Martini) and Chuck (Kazinsky), who have their share of conflicts but still do their best at work. Last but not least, the scientists played by Charlie Day and Burn Gorman are relegated to comedy relief status. The last two characters are hit and miss along with Chuck, the film’s douchebag character, but they still get their shining moments that doesn’t make you fully dislike them at least. As great as the main cast is for the most part along with the battle scenes, I’ll admit that Mana Ashida gets bragging rights for having Pacific Rim‘s most powerful moment in a flashback scene from Mori’s past. Fear, spectacle, visuals and emotions are at its finest in her two minutes of screentime.

It’s inevitable to see visual similarities with Del Toro’s Hellboy films — most notable when Ron Perlman as the black marketeer Hannibal Chau shows up —  but there’s also references to Godzilla, Evangelion, Power Rangers, The Lord of the Rings, Armageddon, and many other films that should keep all audiences entertained and marveled. Most of the fighting takes place during the night, which could have made a film of this type hard to watch, but it still remains visually stunning and the fights between Kaijus and Jaegers are refreshingly not one-sided for the most part and never becomes hard on the eyes like it happened with the brawls between Autobots and Decepticons on Revenge of the Fallen.

As great as I’m making Pacific Rim sound, it’s not perfect. Like I said above, some of the characters are hit and miss and the story isn’t really new even if Del Toro started it from scratch. As for the “2D or 3D” debate, see it in 2D because the battles at night will be hard to appreciate in 3D, but it is marvelous in 2D. I wish the ending could have been handled a lot better that what it was shown on screen. I want to blame The Avengers for the film’s ending to a certain extent, but I can also see that after everything the characters went through, I guess it had to end like it did.

Best film of the year at the moment.