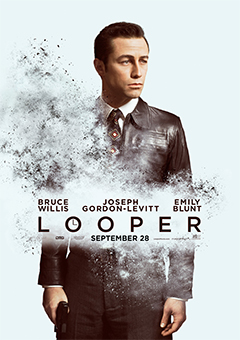 With a third feature film and two impressive Breaking Bad episodes, Fly and Fifty-One, under his belt, it’s safe to say Rian Johnson is one of the most original filmmakers around. The low budget neo-noir Brick was a shocking debut, and The Brothers Bloom proved to be a fun take on the caper subgenre, but it is with Looper that Johnson takes a huge leap at creating a sci-fi film that is both intelligent and entertaining.

Although the marketing would have many thinking it’s nothing more than your average action flick with a time-travel twist, Looper turns out to be much more than that. In the year 2072, time travel has been invented and outlawed, only to be used by powerful criminals when a body needs to be disposed of. Back in 2042, assassins, known as loopers, are hired to dispose of anyone sent back at a designated time and location. Johnson’s film follows a looper named Joe (Gordon-Levitt) who hesitates to kill his older self (Willis), sent back with a large sum of gold to serve as Joe’s retirement funds for the next thirty years. His hesitation leads to the escape of his older self, kicking off a chain of events that threaten the entirety of the looper system.

Nothing in Johnson’s future reality feels implausible, to the point where even time travel feels normal. Nothing is entirely unfamiliar, and even the few changes to the world keep it as realistic as possible, be it new drugs, machinery and weapons, or a society that is notably split between the rich and the poor, with massive skyscrapers and the tiny tents across the street. Rather than focus on making a complex, action-heavy screenplay like many recent sci-fi films have, Johnson’s writing sticks to keeping his characters in situations that are as reasonable as they are surprising and darkly humorous. There are more than enough twists and interesting concepts presented, but each character has a reason for being where they are, even when they seem to be straying from the path the audience expects.

One might expect plenty of action from a film co-starring Bruce Willis, and rightfully so. Gunshots and blood spatter galore will leave plenty of people pleased, but there’s plenty of emotion and drama underneath it all for those who want more than violence, even in Willis’ solid work as Joe’s older self. Joseph Gordon-Levitt delivers an impressive performance as Joe that mirrors Willis’ entire career. Makeup and hairstyling make the two actors look similar. It was unnervingly impressive, but Gordon-Levitt adopts the same mannerisms and quirks that Willis is known for to complete the role. Even the supporting performances add a lot to the film, from Emily Blunt’s convincing American accent, to Jeff Daniels playing against type as a crime lord. Surprisingly enough, it was child actor Pierce Gagnon, five years old at the time of shooting, who managed to quite literally blow everyone away.

Looper may not be redefining sci-fi, but it’s a smart and endlessly engaging film that, alongside Duncan Jones’ Moon, proves to be one of the stronger additions to the genre in the last decade.

*Originally published in the Beacon newspaper