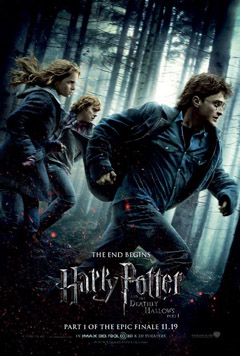 Deathly Hallows is perhaps Yates’ best attempt at a Harry Potter adaption, but considering the other two, it isn’t saying that much. In the greater scale of things, it might follow in Azkaban’s footsteps as an interesting film filled with anguish and desperation… of, I guess, the teenage sort. If the book didn’t work for you, the film seems to improve on action and characters. It’s also of great comfort to say that Warner Brothers’ decision to split the film in two parts was hardly a bad commercial or creative choice… at least for the fans of the books, who will savor each and every detail.

But then again, considering how many chapters were crammed into this first part, one has to wonder what’s left for part two, if not only the “last battle”, which in the book happened off-page… and that epilogue that’s ripped out of the most poorly written fan fiction.

For the non-readers or those who haven’t seen HP6… well, you’re screwed. It really doesn’t work without the background, and you’re better without watching it if you’re going to start complaining. Harry Potter and the Deathly Hallows feels like it was made for the fans of the series only.

The film picks up right after the events on HP6. As Voldemort’s plans have been discovered by the general public, his group of Death Eaters must act quickly. Taking over the Ministry of Magic and creating chaos in and out of the Magical world, killing Muggles and making headlines in “our” world.

Harry’s family is ditched quickly from the story, and Harry’s left alone as he waits for the Order of the Phoenix to pick him up on the day of his 17th birthday — Harry’s finally of legal Wizardry age. He can perform magic now without being tracked, which will prove to be helpful for his non-school activities with Hermione and Ron in their search for Horcruxes — in simple terms, Voldemort’s soul-pieces.

The situation is grim, but Kloves (back again for a Potter adaptation) never forgets the wedding, and there’s humor between those dark moments. It’s needed for the younger crowd, otherwise they wouldn’t be able to take it. The staying in the woods all alone, no human contact except for the three of them. To top it all off, they’ve got a task, but they don’t know how to get there.

Deathly Hallows Part 1 lays heavily on Daniel Radcliffe, Emma Watson and Rupert Grint, and it’s comforting to see them all grown and as more “seasoned” actors. They have learned their craft from the creme de la creme of British actors, and it’s good. The chemistry between them, friends as long as the characters have been, shows in their scenes. We just wish it could be a Rated R edited version. The devastation would have been that much more powerful. There’s that thing about not showing blood in children’s films, there’s a little bit of blood in Harry Potter — two scenes jump out — but those “blood scenes” could have been saved for a particular scene with Hermione, someone we are much more invested in.

Yates’ Deathly Hallows is more than an apt adaptation of the book. It captures the spirit of it and enhances it for the screen in a way that Cuaron’s captured the spirit of Azkaban. Not quite there yet because Azkaban is a better developed book, but up there among the Potter movie adaptations.

Still… I feel Part 2 is going to be dreadful.