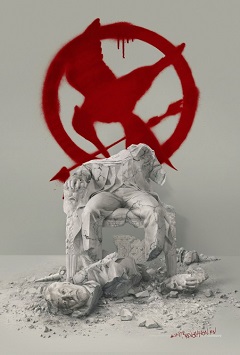 Note: If you haven’t seen The Hunger Games: Mockingjay – Part 1, don’t bother seeing this one yet because Part 2 directly picks up from where Part 1 ended. This review will also address events from the previous film that may ruin your enjoyment of this film.

The Hunger Games: Mockingjay – Part 2 heads for the final showdown between the Capitol and District 13, the latter having gained lots of momentum by the end of Part 1. As the rebellion plans to take over District 2, Katniss Everdeen (J. Lawrence) has had enough with everything going on and decides to head towards the Capitol and straight-up murder President Snow (Sutherland) all by herself, going against Alama Coin’s (Moore) plans of using Katniss as a propaganda tool, alongside using more dangerous tactics to defeat the Capitol.

Mockingjay – Part 2 is pretty much a Katniss-centric film, since most of the scenes focuses on her and the supporting characters surrounding her more often are the Star Squad group, which includes the likes of Gale (Hemsworth), Finnick (Claflin) and Peeta (Hutcherson), the latter still recovering from his brainwashing effects. To its credit, this fares slightly better than its setup, but that’s not saying much considering that one felt overstretched in terms of plotting and hardly anything important happened until the end, when Peeta nearly turned the tables in regards to the war. Speaking of him, it’s through him and Katniss that Part 2 addresses PTSD (post-traumatic stress disorder), confronting the reality of death without being too sad about it. While Peeta is still feeling the brainwashing effects at times, and puts him as a potential threat to anyone around him, Katniss is still scarred by everything going on since the first Hunger Games film up to now.

Other good things in favor of this installment has to do with keeping intact the grim tone it had from the beginning of the series, mounting tension throughout — my favorite moment involved a little blond girl and Katniss, which fared stronger than most of the action scenes. Lawrence’s performance, and the smart cover-up for a scene near the end of the film that should have been done by Philip Seymour Hoffman, who unfortunately passed away before the shooting ended.

While Mockingjay – Part 2 isn’t as unbalanced as Deathly Hallows – Part 2 was with the splitting of a story, it still suffers from the same problems the book had, even if the adaptation followed the book to a tee for the most part in terms of the main storyline. Also, the love triangle between Peeta, Katniss and Gale wasn’t well-developed since we have mostly seen Peeta and Katniss together. But if the triangle wasn’t balanced well previously — Gale gets more screen time during Part 2, but he doesn’t stand out —  it’s hard to expect a major upgrade in here. I admit I laughed at Gale comparing Katniss to a drunk person earlier on, though.

From a technical and storyline standpoint, both parts complement each other accordingly, yet it’s not worth seeing this in 3D at all because hardly any scene merits the tag. The worst scene involved the Mutts, which ended up being tedious since it was shot in the dark, making it hard to tell who was being attacked until the scene is over. The story’s rushed ending wasn’t improved upon at all, and hardly any other character other than Katniss stood out strongly.

Then again, Part 2 is a resolution film. It gets the job done and has more meat in the body than Part 1, but it’s not able to elevate the series as a whole beyond its conclusion nor it reaches the solid heights of Catching Fire.