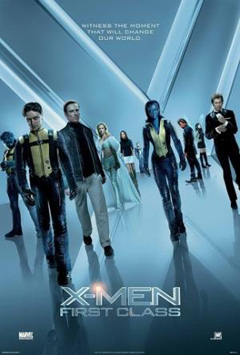 First of all, I have to be honest with you in regards to my anticipation for this film. I thought X-Men: The Last Stand was not good and X-Men Origins: Wolverine was boring, which ended with me being skeptical of another X-Men film being done. However, once I noticed some of the cast members used for X-Men: First Class as well as two of the screenwriters for Thor and Bryan Singer (X-Men, X2) being involved in it, I finally decided to give this filma chance.

Set in 1962 during the Cuban Missle Crisis, X-Men: First Class follows Dr. Charles Xavier (McAvoy) and Erik Lensherr (Fassbender) before they became known as Professor X and Magneto respectively. Xavier – for those who don’t know about X-Men – is a telepath living with shape-shifting childhood friend Raven (a.k.a. Mystique, played by Lawrence) who is publishing his thesis on mutation at Oxford University, while Lensherr – a mutant with magnetic manipulation powers – is tracking down Dr. Schmidt (a.k.a. Sebastian Shaw, played by Bacon) to take revenge for the events that took place earlier in the film.

Meanwhile in Las Vegas, CIA agent Moira MacTaggert (Bryne) discovers that Shaw and fellow mutants Emma Frost (Jones), Azazel (Flemyng) and Riptide (González) plan to take over the world by trying to set up a nuclear war between USA and Russia. Aware that Shaw and his partners have powers that no common human being can perform, Moira resorts to Xavier and Raven to join the CIA and put an end to Shaw’s plans. Xavier and Raven can’t do this alone, so with sponsorship from an unnamed man in a black suit (Platt) and scientist Hank McCoy’s (Hoult) work, they recruit mutants to train them and join their cause – including Erik Lensherr, who befriends Xavier, despite their differences in views.

Directed by Matthew Vaughn (Kick-Ass), X-Men: First Class is a prequel film that takes place before the events of the previous X-Men films. For the most part, the film focuses on Charles Xavier and Erik Lensherr’s past before the X-Men and the Brotherhood of Mutants were founded. Xavier and Erik became friends, but they differ in their views about how mutants should live. Charles wants to see human beings and mutants able to co-exist peacefully, while Erik views human beings as a threat to mutants. The film also explores how Raven and Hank aren’t exactly pleased with their mutant appearances as well as their desire to be normal [read: human] and dealing with their superpowers.

Some of the things that harms First Class relies in the secondary storyline between Raven and Hank, which came across as kind of cheesy in the romantic aspect, despite both Lawrence and Hoult being good actors. Also, casting January Jones as Emma Frost and how Frost was used in this film was not exactly good at all when you consider that she has proven to be talented on AMC’s Mad Men. Special effects-wise, Mystique and Beast looked cheap on the big screen. And unless this is the first time you watch an X-Men film without knowing anything about it at all, First Class is predictable because everyone knows how it’s going to end. You already know the fates of Magneto, Mystique and Xavier.

Despite how predictable the ending is, it’s a very awesome ride to see how we arrive there in First Class. The chemistry between Michael Fassbender and James McAvoy is electric and bromance-worthy. McAvoy is very charming as Charles Xavier, but Fassbender is even more impressive in terms of presence and the way how he handled Lensherr/Magneto and he is easily the best actor among the cast. Kevin Bacon as Sebastian Shaw serves very well as the main antagonist of the film. Those three actors can easily override the negative aspects of First Class. The storytelling is effective and the special effects were pretty good for the most part, except for the two characters I mentioned above. There’s kickass scenes and the first half of the film is almost character-heavy, but when we arrive to the action scenes, you’ll be caring for most of the characters. You also gotta love the variety of languages and locations First Class uses.

I would recommend anyone to see First Class because it brings refreshing energy and entertainment to the X-Men franchise, something The Last Stand and Origins: Wolverine lacked. Sure X2 still remains as the best X-Men film, but First Class is very good for a superhero film on its own thanks to Matthew Vaughn, the Thor writers (Miller and Stentz), Fassbender, Bacon and McAvoy.

P.S: There’s also cameo appearances by Hugh Jackman and Rebecca Romijn. Be sure to notice them if you watch it.