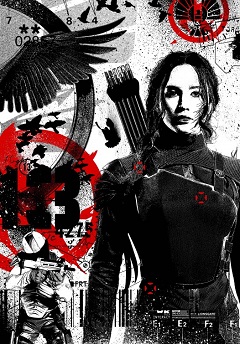 Mockingjay, the third and final installment of The Hunger Games — split into two films — picks up right after the events of The Hunger Games: Catching Fire, whose final moments revealed that a rebellion against the Capitol and President Snow (Sutherland) has been on the works for years by the apparently extinct District 13, governed by President Alma Coin (Moore) with help from the likes of Haymitch (Harrelson), Plutarch (Hoffman), Beetle (Wright) and Finnick (Claffin).

The Hunger Games: Mockingjay – Part 1 shows Katniss Everdeen (J. Lawrence), who is still emotionally scarred from participating in two Hunger Games tournaments, reluctantly becoming the Mockingjay, the poster child for District 13’s mass rebellion, which has gained big momentum following the resolution of the 75th Hunger Games tournament. At the same time, Katniss is challenged in setting her priorities [see: beloved ones], especially in a world that sees her as a heroine.

In contrast to the previous two films, Mockingjay – Part 1 changes from showcasing reality tv media into one that exposes propaganda media, the latter most notably seen through Capitol-endorsed Flickerman’s (Tucci) interviews with Capitol-brainwashed Peeta (Hutcherson) as well as District 13 shooting promos with Katniss to keep the rebellion afloat. In addition to that, themes of revolution, war, politics and dictatorship are also displayed. All of that should have made up for an interesting and entertaing film, not to mention that the stakes are much higher in Mockingjay. Unfortunately, dividing Mockingjay in two films not only wasn’t a good idea — especially in regards to Part 1‘s ending, which didn’t felt like a big deal despite showing how powerful the Capitol is — but the execution of the first half seems like we’re waiting for Mockingjay – Part 2 to happen and ends up feeling overstretched and kind of redundant with its propaganda moments and constant dialogue, while not having much action scenes to display, making the film slow to watch despite some of its good-to-great moments and the cast.

“Are you, are you
Coming to the tree?
Where they strung up a man they say murdered three.
Strange things did happen here.
No stranger would it be
If we met at midnight in the Hanging Tree.”

Jennifer Lawrence as Katniss is still great to watch, especially when she sings The Hanging Tree, which was one of the film’s strongest moments in terms of illustrating the battle between District 13 and the Capitol. However, both Julianne Moore and Philip Seymour Hoffman shined stronger than everyone else. Moore’s performance as Alma Coin was great as she seems to be not so different from Snow despite her good intentions for Panem’s future. On the other hand, Hoffman’s Plutarch had more screentime and greatly displayed a sense of humor, smarts and even filmmaking skills — indirect reference to Hoffman’s only work as a director — as the mastermind behind the rebellion. It’s great to see him being used more often compared to how little he was used in Catching Fire. The rest of the cast are good to watch for the most part, although the presence of Effie (Banks) comes across as quite a distraction from what’s going on in the plot. Regarding the new characters introduced in Mockingjay – Part 1, it was hard to care for most of the new characters — we’re introduced to Cressida (Dormer), Boggs (Ali), and a few other folks — except for Moore’s Coin.

Despite its good moments and steady build-up for the grand finale, The Hunger Games: Mockingjay – Part 1 doesn’t feel all that great to watch because it lacks gripping moments, suspense and entertainment value seen in the previous installments. Worst of all, hardly anything important happens during the film and by the end of it.

Extra quarter star for Moore and Hoffman (to whom the film is dedicated).