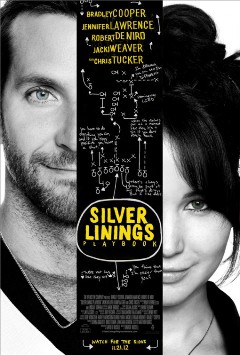 While it’s inevitable to label Silver Linings Playbook as a rom-com film, it’s definately more than just a mere rom-com film. Superstitions, mental illness, damaged characters, American football, dancing and more are involved. And despite the mix of elements present in this film that might seem awkward at first glance, it works well for David O. Russell’s film adaptation of Matthew Quick’s novel.

Silver Linings Playbook follows Pat Solitano (Cooper), a man who has lost nearly everything in his life: his house, his job and his wife. And if that wasn’t bad enough, Pat has spent eight months of his life inside a mental institution because of his bipolar disorder and ended up emotionally scarred from his past.

“You have to do everything you can and if you stay positive, you have a shot at a silver lining.”

Despite all the bad things that have happened to him before, Pat’s determined to stay positive in life and fight back for his ex-wife’s (Bee) love. However, his life inevitably changes when he meets and befriends Tiffany (Lawrence), a young widow and recovering sex addict with issues of her own. They become friends and some time later, Tiffany promises to get Pat a letter to his wife as long as he dances with her in a competition.

As it goes with rom-com films, however… screw it, I’m gonna go ahead and say it: I enjoyed Silver Linings Playbook a lot more than I expected to, despite the final minutes that suffer a bit from the typical rom-com clichés. I found it to be neither boring nor phony, the lead characters aren’t really portrayed as a romantic couple (nor cartoon characters given their conditions, which O. Russell avoids cleverly), and it boasts solid performances from the entire cast. There’s also a hell of a dance scene, a great soundtrack and the damaged characters are interesting to watch in the same way as it happened on O. Russell’s The Fighter (but nowhere near as unlikable as Dicky and Alice were), among other things.

While Silver Linings Playbook puts Pat front and center as the main character, and Bradley Cooper does a great job as the lead character by channeling Pat’s moments of peace, blunt-as-hell lines and sudden explosions, it’s actually Jennifer Lawrence’s Tiffany who steals the show. Lawrence is not only adorable to watch alongside Cooper (they have good chemistry with each other), but she does some fantastic work with the emotional instability (especially her rage) and funny lines that Tiffany has alongside conveying the suffering she went through in her life with ease. And my God, I would kill to dance with her someday, if you know what I mean.

Among the supporting cast, Robert De Niro stands out nicely as Pat’s father, who happens to be not much different than his son as he suffers from OCD and has a gambling (and football) obsession that affects everyone surrounding him for better or worse — and he mirrors USA’s obsession with American football to a certain extent. Jacki Weaver, who plays Pat’s mom, does some decent work as the woman who endured the problems regarding her husband and son (albeit not enough to justify an Oscar nomination). Julia Stiles and John Ortiz play as the married couple who sets up Pat and Tiffany meeting for the first time while Chris Tucker (deprived from his high-pitch voice) plays as Danny, Pat’s friend from the mental institution who seems comfortable with himself.

Overall, one of the bests films of 2012 as far as I’m concerned that mixes other subjects along with the rom-com genre and remains interesting to watch with stellar performances from Cooper and Lawrence.