The Fangirly Diary of a Geek Girl: Of dragons and ant-men~

Greetings, my fellow geeks! This week we have some news still about The Hobbit: The Desolation of Smaug. Mostly about the titular character that doesn’t come from The Shire. Also we finally have confirmation about Ant-Man‘s casting. And this is how the week started:

Yay! Here’s the trailer of Vicious‘ Christmas Special! I’m going to sit my ass on the 27th and watch this online~

Tom Hiddleston is Male Style Icon 2013 according to a newspaper I didn’t know existed. LOL.

Hiddleston is a quintessentially British gentleman, who looks like he goes to sleep in a three-piece suit, so much so that Esquire used him to illustrate a ‘How to wear Black-tie’ guide.

Not gonna lie, this tall glass of water knows how to wear a suit. But, as much as I love Hiddles, can you be a Style Icon if you buy the one (perfectly tailored) shirt every season and wear it to death? Then again, how would I know. I’m sure I won’t ever be a Style Icon~

Talking about fashion, Martin Freeman, besides talking about The Hobbit and Sherlock, rants about why he hates stylists. Aw. I get his reasons though. LOL.

Death to the stylist. Death to the stylist and the people who benefit from them. Death! What offends me is people end up going “Oh, he’s so well dressed.” Saving your presence, GQ does a lot of that. “That man, he’s so well dressed.” Bullshit! See that man when he picks his own f***ing clothes. […] They shouldn’t be considered best-dressed, their stylist should be best-dressed!

Anyway, here’s Richard Armitage talking about one of my favourite parts of The Hobbit: The Desolation of Smaug… yes, The Barrel Ride!

it was like being at a theme park for two weeks and they were dumping tons of water on us and trying to get us to go under the water. But I think Martin had the most difficult role in that, because he wasn’t in a barrel and they, there was an underwater camera and he would swap out with the stunt guy and it got quite hair-raising. But I think it was worth it.

Talking about that, back when The Hobbit trilogy were two movies, that sequence was going to be the climax of the movie! Yep, Peter Jackson said that the first movie would have ended up with a silhouetted Bard on the river bank.

Rumor has it that Marvel wants Benedict Cumberbatch for a role. What role? Some say Doctor Strange. But does Benny dear look good enough with a trimmed beard to be Doctor Strange? At least he’s got the cheekbones for it!

Also, here are the previews of two comics I follow religiously~ Young Avengers #14 and Thor: God of Thunder #17. 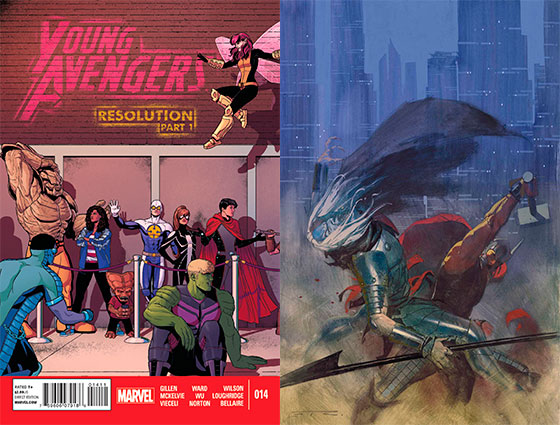 The Hobbbit: The Desolation of Smaug won the box office race on US and nobody is surprised~ They start at $73.6 million. On the other hand, The Hunger Games: Catching Fire just passed $700 millions world-wide! Get money, Katniss!

Some lucky bastards got to watch “The Empty Hearse” ahead of everyone not invited to the special screening of Sherlock series 3’s first episode. Word of mouth of the atendees claims that it was awesome. Yay! Also, executive producer Beryl Vertue explains why we never ever going to get more than three episodes per series:

We have always felt confident about the show and now we have ended up with these two huge film stars. I know people go on about the BBC and why they don’t do more episodes. No-one’s got time to do more than three. In a way that makes it kind of special, it’s what we always hoped it would be – event television.

On less awesome news, Cartoon Network are full of asshats. Television producer Paul Dini said, in an interview with Kevin Smith, that executives don’t want largely female audiences for their superhero cartoons because “girls do not buy the toys”. Oh my god, fuck them!

Cartoon Network was saying, ‘F***, no, we want the boys’ action, it’s boys’ action, this goofy boy humor we’ve gotta get that in there. And we can’t—’and I’d say, but look at the numbers, we’ve got parents watching, with the families, and then when you break it down—’Yeah, but the—so many—we’ve got too many girls. We need more boys.’

Also, Brian is back to Family Guy because of course he is! Seth MacFarlane even tweeted about it. Merry Xmas and all I guess~