Hobbit: The Desolation of Smaug, The 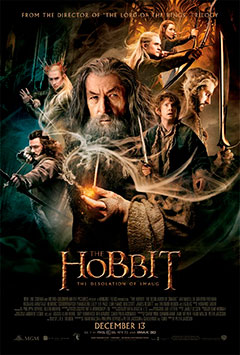 The Hobbit: The Desolation of Smaug is one of the best (and most expensive) fanfiction I have ever seen!

I already know some people are not going to like this film. Tolkien purists are going to seethe. But, as someone who understand how books and movies work in different ways, I think this one was a step-up from the last movie.

But what is this about?

As with all the Peter Jackson Tolkien-based movies, The Hobbit: The Desolation of Smaug starts with an introduction. We see the first encounter between Gandalf The Grey (McKellen) and Thorin Oakenshield (Armitage) in the city of Bree, which will kickstart this whole adventure. Fast forward and we have adorable hobbit Bilbo Baggins (Freeman) and the dwarves still on the way to The Lonely Mountain, but this time they know they are being hunted by orcs. This is the story of the last leg of the trip to Erebor, but it is not the end of the adventure yet. There’s still a dragon to get rid of.

If some people thought that there wasn’t much going on with The Hobbit: An Unexpected Journey and the pacing was a tad too slow, this one certainly has improved on that! In fact, it was too fast on some places, and there was almost no dragging! Quite a feat for such a long movie. I do wish they had more time to appreciate Beorn’s house or Thranduil’s realm, because this in turn meant less screen time for both Mikael Persbrandt and Lee Pace, which is criminal! Specially the latter one, since there was so much marketing surrounding his character. At least Thranduil’s interactions with Thorin and his son Legolas (Bloom) were quite good. Something tells me both actors will get more scenes in the extended edition. I guess there were making space for all the new stuff that was added.

Let’s start with my favourite part: The Barrel Ride. Yes, I will put in caps! That was an incredibly fun scene. I bet it’s even better in 4DX. It was also very different with how things happened in the book. And yes, many of the changed and added scenes were action scenes, imaginatively coreographed and filmed action scenes. The other additions? Made to ante up the drama that is to come in the last movie.

That aside, the most glaring departure from canon is the very existence of Tauriel (Lilly). Peter Jackson made a good choice to add her and make the story less of a sausage fest. And she was awesome. Not only did she kick ass but she was also quite aware about things not being so peachy, instead of the isolationism of the other Mirkwood elves, specially the royal family. The only thing that tarnished her was that she was made into a love interest. Thankfully, the whole issue wasn’t as cringey as most love triangles are.

As for the returning cast, Martin Freeman is still the best Bilbo ever. Sorry, Ian Holm. There’s obvious character growth as well as some depth to Bilbo’s relationship with the ring. You know what ring. Yep, this Bilbo is not the load anymore and spends lots of time being useful. In fact, time constrictions make him even more efficient than book Bilbo.

Gandalf also has many moments to shine, specially as he departs the company for other dangerous business. Business that links this trilogy to the previous one. The scenes will also showcase his knowledge, wisdom and power, either with fellow wizard Radagast (McCoy), or the evil Necromancer (Cumberbatch) and his ugly army of orcs.

As for the dwarves, Thorin Oakenshield also has character growth, but more than that, some of his less savory personality traits make an appearance in ominous ways. The rest of his company has more moments to do useful things, with Kili (Turner) being the winner with his interactions with Tauriel. That means poor Fili (O’Gorman) was the only Durin without a proper storyline, despite being the heir; he does have his moment of family conflict though. This time around it was Balin (Stott) who had a moment with Bilbo, making the dwarf acknowledge the hobbit’s courage. Bombur (Hunter) still had no lines, but he managed to steal the scene for a little while during The Barrel Ride.

We have two more archers in the movie, one new and one known. One was in the book and the other, as much canon character as he is, wasn’t. And the actors kinda look similar in the right light. Yes, we are talking about Luke Evans as Bard, and Orlando Bloom returning as Legolas. Glad to say both men did remarkable jobs in their parts, showing Bard as a rebel and a man wanting to protect his family and people, and Legolas does act younger even if poor Bloom has obviously aged and CGI-ing his face didn’t help much.

Finally, there’s the titular character that is not Bilbo Baggins. Yes, Smaug The Terrible. Or Smaug The Stupendous. For he is actually both. Kudos to both Benedict Cumberbatch for the voice acting and motion capture, and the artists who did the design and animation. Even if he didn’t exactly looked like the book depictions, Smaug is a general success and should be remembered almost as fondly as Gollum.

Besides the acting, if there was one thing that should be praised, it was the scenery. You can tell Peter Jackson and company were happy to recreate new places instead of using ones we have already seen in Lord of the Rings. And boy, did their enthusiasm showed. Every single one of the new environments was unique and gorgeous and fun in their particular way.

Yes, the consensus about The Hobbit: The Desolation of Smaug is that it’s better than its predecessor. Here’s to hoping that The Hobbit: There and Back Again becomes the best of them all. I can already tell it will be quite emotional.

That ending was a total cockblock though!

While Peter Jackson’s cameo was easy to find, tell me if you also managed to see Stephen Colbert, the biggest Tolkien nerd on TV.