Peter Hollens – Misty Mountains: Songs Inspired by The Hobbit and Lord of the Rings 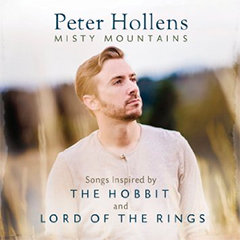 Peter Hollens, best known for his work on YouTube as an a cappella artist, will soon release Misty Mountains: Songs Inspired by The Hobbit and Lord of the Rings, which as the titles implies is full of the most popular songs from the J.R.R. Tolkien/Peter Jackson franchise.

With impressive vocals and fantastic arrangements, Hollens takes us back to Middle Earth, with the help of fellow artists Taylor Davis, Tim Foust and Hank Green. The album is a mix of brand new songs and remixes, alongside previously released tracks (which you can check out in his YouTube channel, along other fantastic covers), in near perfect production for the movies’, a capella, and Peter Hollens’ fans alike.

The album starts with I See Fire, originally sung by Ed Sheeran for The Hobbit: The Desolation of Smaug. As usual, Hollens uses his own voice in all parts, layering and blending; but unlike his original rendition of the song, this time Taylor Davis’ violin is added to the background for a more grandiose feeling. Taylor Davis will come back with her violin for May It Be (Enya, The Lord of the Rings: The Fellowship of the Ring), where Hollens pulls off a falsetto brilliantly. In fact, he works great for songs originally sung by ladies, such as Gollum’s Song (Emiliana Torrini, The Lord of the Rings: The Two Towers), Arwen’s Song a.k.a. The Houses Of Healing (Liv Tyler, The Lord of the Rings: The Return of the King) and Into the West (Annie Lennox,  LotR: RotK).

Then there’s the special case of Song of Durin, which was not in any of the movies, but was composed and sung by YouTube artist Eurielle, using the lyrics written by Tolkien in Fellowship of the Ring. His voice acquaired an appropriate haunting quality, but I hope he gets to redo it in a lower register at a later date. This is, after all, a dwarf song, originally sung by Gimli in the book. He also does an adequate job in In Dreams, singing it with an adult quality, but it lacks the otherworldly feeling of listening to then child soprano Edward Ross in The Lord of the Rings: The Fellowship of the Ring.

His usual range works great for Song of the Lonely Mountain and, in fact, I like Hollens’ version better than Neil Finn’s for The Hobbit: An Unexpected Journey. Hollens also does powerful renditions for the Billy Boyd’s songs, Edge of Night (LotR: RotK) and The Last Goodbye (The Hobbit: The Battle of the Five Armies). A lower range was needed for Misty Mountains (Richard Armitage and other Dwarves cast, The Hobbit: AUJ), and so Hollens gets the help of Tim Foust. Good call, as we get a gloomy and strong first verse with Foust’ bass, and then transforms into Hollens’ tenor for a great eerie feeling.

The music from both Lord of the Rings and The Hobbit films is very beautiful, but it’s also dramatic and sometimes larger than life, so it makes me glad that this fantastic album ends on a merry note with Hobbit Drinking Medley, which has become my favorite track and an absolute earworm. So thanks for Hollens and Hank Green for that, I’m sure many-a-geeky reunion of mine will end with a tipsy rendition of this song.