Hobbit: The Battle of the Five Armies, The 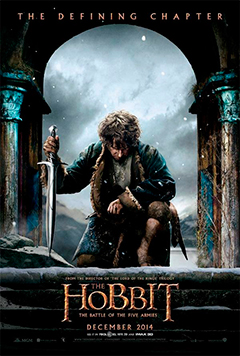 Well, I had not cried so much for a movie in a while.

The Hobbit: The Battle of the Five Armies starts immediately after The Hobbit: The Desolation of Smaug ended, with the dragon (Cumberbatch) attacking Lake Town while Bard (Evans) tries to put it down, as Tauriel (Lilly), Bard’s children, the dwarves left and the citizens try to escape to the shore. Meanwhile, in The Lonely Mountain, Bilbo (Freeman) and the dwarves watch powerless at the dire situation. Except Thorin (Armitage), who stands apart and his gaze remains in Erebor. Of course, Smaug gets defeated and the titular battle takes place. And oh boy, was it an emotional rollercoaster.

While the Freeman was, once more, on point as the titular character and he could play Bilbo in his sleep, and the battle was as epic as Peter Jackson knows how to make it, this was Thorin’s show. I applaud Armitage for all the feelings he evoked. The Dragon Sickness tore through his psyche and made him revoke promises and see enemies in friends and kin. But there are moments when old Thorin comes back. His interactions with Bilbo during both these moments are painful to watch, and are what cements Bilbo’s decision to help by defying him. Thanks to these two great actors, those last moments between the two were a very poignant moment in the movie.

The other dwarves didn’t do much except react to all these happenings, but they did it with aplomb. Specially Dwalin (McTavish) and Balin (Stott) who had known Thorin all his life and can’t meet eyes with this strange in their leader’s clothes. They all know what’s going on, but Thorin is still king. In the end, Thorin must defeat the enemy within before he can join the armies battling outside his kingdom.

There’s a lot going on in the movie, what with the clash in Dol Guldur between The Necromancer (also Cumberbatch) and The White Council, where we see Galadriel (Blanchett)’s power. Also, Saruman (Lee) still got the moves! Then there’s second dwarf with more screen time, Kili (Turner) who shares some scenes with love-interest Tauriel (Lilly) and with his brother, poor Fili (O’Gorman) who got the short end of the stick of the Durin trio. Evans as Bard does a fine job as capable leader, action man and concerned father, and this makes his pledge for the promised aid from Thorin seem very just, more so than it did in the book. Pace’s King Thranduil is a capable leader if very cold, who is basically a good person but doesn’t seem to care much about anyone but his own. Newcomer Conolly as Dain was a very entertaining revelation, very much what one has in mind when thinking of a Tolkien dwarf.

The technical specs of this movie were very good, the opening scene with Smaug was terrifyingly fantastic, the battle was epic and not confusing at all, and the individual fight scenes were entertaining and creative. Even if, as usual, it was a little over the top where Legolas was concerned with his Georgian dancer moves and Super Mario jumps. Also, I don’t know if my eyes are used to it or the technology is simply better but the HFR 3D looked great compared to the first movie, which I didn’t mind but many complained about. About the score, I applaud Howard Shore for once more creating epic and evocative music, even if most of the tunes were already familiar. Of course, listening to Billy Boyd’s “The Last Goodbye” was spectacular too.

Since this was the shorter of the Jackson/Tolkien movies, The Hobbit: The Battle of the Five Armies was tightly packed and didn’t really have slow moments. In fact, after it was over, you wanted it to keep going a bit more. It certainly didn’t have the multiple endings of The Return of the King. And now, I kinda wish it had.

The only thing that takes away from this movie is a bit too much comic relief with Ryan Gage as Alfrid, and (even if it may seem blasphemous for some fans) too much time spend on Elves. I wish they could have taken some of the screen time given to these characters and gave it instead to Bilbo and all the dwarves. I certainly hope for more moments with them in the extended edition!

Finally, with the many hints of things to come in Lord of the Rings (specially one that couldn’t be any more obvious), The Hobbit: The Battle of the Five Armies was not only the conclusion of The Hobbit trilogy, but also worked as a bridge between trilogies. Yay for those strong enough to watch a marathon of all Jackson/Tolkien movies. I certainly will someday soon.