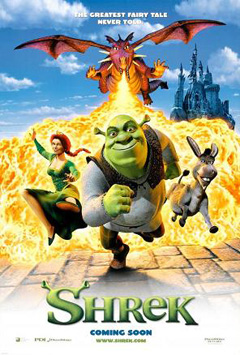 10 years ago, Dreamworks unleashed Shrek into the theaters and it became a huge franchise in the animation world thanks to its characters, its storytelling and great use of humor. Shrek also became the first film to win the Academy Award for Best Animated Picture.

Shrek follows a green ogre (Mike Myers, replacing Chris Farley who passed away before the film was done) – whose name is the same as the film’s title – who lives in the swamps, far away from civilization. One night, Shrek discovers that his swamp is invaded by all sorts of fairy tale characters and a loud-mouthed, obnoxious donkey (Murphy) – whom Shrek met earlier during the film – who were forced to move there thanks to Lord Farquaad (Lithgow). Shrek is not amused with this and sets off with Donkey to find Lord Farquaad and persuade him to give his swamp back. Instead, a deal is made.

Lord Farquaad, who wants to become the King, sends Shrek to rescue Princess Fiona (Diaz), who is waiting for her one true love. After Shrek and Donkey rescue Fiona, the ogre and the princess start to bond on the way back to Farquaad’s place. Not only does Shrek realizaes that he’s falling in love with Fiona, but Fiona is keeping something secret.

To be honest, I didn’t watched Shrek at the cinemas back then. Two of my reasons were my hatred of watching dubbed films – I’ll admit the Latin American dub works very well for this film – and because it seemed like a kiddy film based on looks alone, but don’t let the latter fool you into factoring whetever to watch it or not because the humor isn’t all child-friendly. After I finally gave it a shot two years after it premiered, I could say that I enjoyed it a lot. I was not only surprised with how great it looked in terms of animated environments, but the little details that enhance the film in humor and storyline aspects are well done. Shrek also questions why should fairy tale characters be perfect in everything too, which is something to be noticed.

Eddie Murphy pretty much steals the show with his voice performance as Donkey thanks to Murphy providing the character with a loud, expressive, vivacious voice along with great comedic timing. Donkey is pretty much a perfect sidekick for Shrek, who tries to act like he’s scary and evil, but he’s got a soft heart deep inside of him. Mike Myers fares very well as Shrek and makes him more likeable than say, Austin Powers. Cameron Diaz and John Lithgow work well, but they don’t shine as much as the other two. I also loved the scene with the Gingerbread Man and Lord Farquaad, pretty cute and funny at the same time.

A few flaws with Shrek includes Dragon falling in love with Donkey, which isn’t fully explained and some of the fart jokes, which can be hit or miss. But Shrek can actually be one of those animated films that can be enjoyable for both kids and adults without having parents dreading to take their kids to watch films that seems like only kids could enjoy in theory.