Hobbit: An Unexpected Journey, The 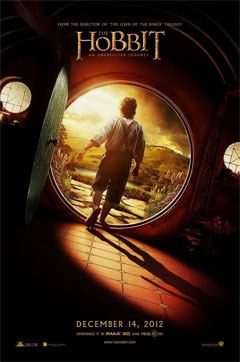 It’s always nice to return to places you love, and that was what The Hobbit: An Unexpected Journey meant to me, a return to the beloved Middle Earth. That’s why I didn’t care they turned this one book into a trilogy, because, hey, more Middle Earth for me. It’s been more than 10 years since I saw such places as The Shire or Rivendell for the first time, and they are as gorgeous as ever, perhaps even more so.

Because whatever some whiners say, the HFR format made everything prettier. Ok, it looks like watching a giant blu-ray and some movements are sometimes too fast, but everything pops out and makes the 3D look even better.

But beautiful production aside, it was the characters that made the story. Freeman did a good job as a young Bilbo, the hobbit who embarks in “an unexpected journey” with 13 Dwarves and one Wizard to recover a mountain and a treasure from a dangerous dragon. It’s quite obvious he’s in a different point in life than Holm’s Bilbo in Lord of the Rings. As Gandalf told him, by the time he returns, he won’t be the same. Freeman’s Bilbo had quite a temper and was a bit of a snarker. He’s also very unaware of his potential. It was such a delight to watch, because it was frankly adorable. Then again, I find all Hobbits adorable. Even the Sackville-Bagginses.

Even Gollum. Especially Gollum. Once again Serkis shines at this. It was a small part in the movie, but it was so important. And he remains the best actor whom you never see. Although, I am not sure what Tolkien would have thought of people going “aww” whenever Gollum made a face.

The other important character was Thorin Oakenshield (Armitage), and he was more epic than in the book, with added backstory and dialogue. You can tell this Dwarf was meant to be King, but you can also see the character flaws that he must outgrow. By the end of this movie, he’s already changing for the good, as much as Bilbo, and their relationship gets better because of this.

The rest of the Dwarves, while very distinct from each other and very entertaining, weren’t as important. Of course, there were some that stood out, like Balin (Stott), the old warrior so faithful to Thorin, and Bofur (Nesbitt), who had a bittersweet moment with Bilbo.

We also saw many familiar faces, at the beginning with Holm and Wood, and at the White Council with Lee, Blanchett, and Weaving. And then there was Gandalf (McKellen), the most important of the familiar faces. He’s much the same we saw in Lord of the Rings, wise yet sarcastic, resourceful, and with a temper that doesn’t suffer either fools or stubborn ones. It’s also curious to see his relationships with other wizards, be it proud Saruman the White, or nature-loving Radagast the Brown (McCoy).

Now, for the antagonists, in this movie the big baddie, the dragon Smaug, is barely seen. That doesn’t mean we don’t have conflict. There are a lot of smaller ones, besides the known one (Gollum), we have goblins, trolls, wargs and orcs. The encounter with Radagast also tells us about the Necromancer, who is also very dangerous, and just like Bilbo taking The Ring from Gollum, this character also links this movie to the Lord of the Rings trilogy.

Of course, not everything is perfect. And while the only problem I found with The Hobbit: An Unexpected Journey was the pacing, it is an important one. For moments the movie seemed to drag, and, while entertaining, it also had filler scenes. Thinking back on it, though, something tells me the more I watch this movie, the more I’ll love it. I’d definitely come back to see the adventures of this brave little Hobbit with the proud Dwarf King and his Company. Because Gandalf didn’t just ask Bilbo to share in an adventure, he asked us too, and we said “yes”.