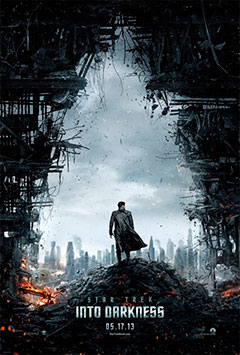 Star Trek Into Darkness is not as entirely original as its predecessor was, but it doesn’t mean it’s any less entertaining.

The movie starts right with some action, just like first one, even if it’s not that relevant to the main plot. It does show what the crew is doing now and show us exactly who they are and what motivates them. After that, we see villain John Harrison (Cumberbatch) for the first time, and his subsequent attacks on Starfleet become a personal matter to Kirk (Pine) et al. This will mean persecutions, reveal after reveal and throwbacks to a classic and beloved Star Trek movie.

Man, J.J. Abrams and the writers must be quite thick-skinned because hardcore trekkies are going to flay them. Especially after that ending that felt a bit of a cop out. That said, the movie is very enjoyable and action-packed. It barely slows downs, and when it does the actors can usually pull it through.

Talking about the actors, oh my god Benedict Cumberbatch. While he is underused and could escape the backslash that is bound to happen if he were a different villain, he steals the show every time he is on screen. The only moments he didn’t were the small parts where he shared screen time with Simon Pegg who remains awesome as Scotty. He was menacing, he was articulate, he was so very angry yet managed to shed tears that surprised and moved me. Also, he kicked so much ass. Those fighting scenes also showcased him how very not human he was, even before the “big reveal”.

As for the other actors, Pine and Quinto still are a great duo as Kirk and Spock. And while friends, they still have personality clashes and it is both damn funny and very poignant. Especially when Urban as Doctor McCoy joins the party too. Kirk takes advice from both of them the most since they are like his mind and his heart. Which makes it funny (and a bit scary as McCoy says) when both agree.

Then there’s Uhura (Saldana) who also makes another trinity with Kirk and Spock. Both humans try to comprehend the half Vulcan and also get frustrated by him. But they still love him very much, and Spock loves them back. The movie manages to make use of her abilities too, and she doesn’t hesitate to jump in the fray if she needs to.

The other members of the crew that get names still do their jobs adequately. Cho and Yelchin as Sulu and Chekov had their moments to shine, which also reminded me of the old movies and made me think about the possible future of these characters. And, like I said, Pegg as Scotty is still very awesome, and manages to be kick-ass and funny when needed.

Alice Eve as Carol Marcus didn’t have much to do, but she was useful when needed and also gave us (really unnecessary) fan service in that one scene we already saw on the trailer. She smuggles herself into the Enterprise because she suspects daddy dearest Admiral Marcus (Weller) is up to no good. She’s right. Weller also does a terrific job as Machiavellian Marcus, but we know how such characters usually end.

Talking about fan service, the movie is filled with them. Trekkie fan service, that is. We got Klingons, tribbles and Spock Prime (Nimoy). And they were all more or less relevant to the plot. Though I wish they would have done more with the Klingons though, considering this whole issue with Harrison could have turned into a war with them.

The technical aspects of Star Trek Into Darkness are impeccable as one expects. As for a 3D conversion, this one is not bad at all. It works better in some moments than others though. And, yeah, we still got lens flare. The score was also quite good and serviceable, except for the moments when it was more than that. The classic Star Trek theme was also around for time to time.

So yeah, for all its Deus Ex Machinas, Chekhov’s guns, and changes to a known character of Star Trek lore that is bound to piss off many trekkies, Star Trek Into Darkness still manages to keep this franchise alive and for that I am grateful.