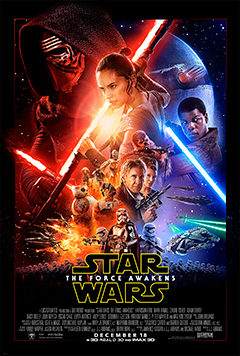 Star Wars: The Force Awakens is the new hope of the franchise.

The story starts three decades after Star Wars Episode VI: Return of the Jedi, where Luke Skywalker is missing, the Rebel Alliance has become the Resistance and the Galactic Empire has been succeeded by the First Order. Without spoiling much, we have Finn, a former First Order Stormtrooper, who meets the scavenger Rey in the desert planet Jakku, and they fall into the new adventure where they meet old beloved characters and new soon-to-be-beloved character along the way.

Star Wars: The Force Awakens is a very entertaining and gorgeous-looking movie. Surprisingly, it’s quite funny too! And the humor actually works! It humanizes the characters, and strenghtens the relationships between them. There are no slow moments in this film. No overly long explanations of how The Force works here! Yep, they kept the exposition to a minimum in order to let the plot progress. Most things were shown instead of told, which is already a great improvement over the prequel trilogy.

The plot itself was quite simple, but the journey was fantastic, and it had plenty of fanservice. Some plot points were obviously homages to the original trilogy, but they managed to do it without being derivative.

Let’s talk about one of the best thing about the movie: the actors. There’s actually great acting in this movie. The main characters, Boyega and Ridley have excellent chemistry, and they were clearly happy to be there. They were as fun and dramatic as the script needed. Isaacs’s Poe is the most likeable character ever, even if we don’t see much of him. I can’t believe he gets to be Apocalypse in X-Men‘s next film. As for BB-8, a.k.a. the most popular merchandising of the film, he’s adorable and funny without overstaying his welcome.

Driver’s Kylo Ren is quite a human villain for a masked guy with a voice box. He’s also quite motivated. And you can actually understand, but not condone, his motives. Never condone. Other bad guys were Gleeson’s General Hux, who was there to be a young officer asshat, who had a curiously competitive relationship with Ren. As for Captain Phasma (Christie), she’s like the new Boba Fett, with everything it entails.

I am glad to say that Han Solo (Ford) was not shoehorned into the movie. Dude was very integral to the plot, and gets to do stuff. There has been some character growth for Han in those thirty something years that have passed. He’s not the same smuggler we remember, but his core is the same. His relationship with Chewie was fantastic, with all the banter that showed a long time friendship. The scenes between Ford and Fisher were handled beautifully. And the movie doesn’t just breeze through them. We get to feel the emotional moments.

As for Luke Skywalker (Hamill), well, he was there, he did his job, and finding him was the catalyst of the story. But I cannot write more without venturing into spoiler territory.

Most other characters were great, but didn’t have as big role to play. Except for two CGI characters:  Supreme Leader Snoke (Serkis) and Maz Kanata (Nyong’o). They didn’t have very long scenes, but moved the plot along. Thing is, with all the practical effects and real locations, they popped up as CGI, and were a bit distracting. Even if Nyong’o oozed charisma through her motion capture performance, and Serkis was appropriately menacing in a distant way, we are not talking Caesar in Planet of the Apes movies level here.

Another great thing about the movie? The action sequences. J.J. Abrams knows his action sequences, they were exciting and fast, at times even suspenseful, with great cinematography, and he kept the lens flare to a minimum. And then, there was this great sense of nostalgia at listening to the very familiar sounds effects.

The fight scenes were also a sight to behold. As we were promised, they were gritty and raw, not the heavily choreographed thing with no suspense we had in the prequel trilogy.

By the end of it, many questions were left unanswered, and that’s great! We should be left wanting to watch the sequel right now. And speculating while we wait for answers. Good job, team! Star Wars: The Force Awakens is a great addition to the saga, and it’s a great beginning for a new generation of fans. See you in a couple of years for Episode VIII, and in the meantime, welcome Rogue One!