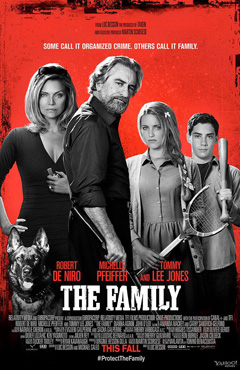 I had heard so much crap about Luc Besson’s The Family — I gotta admit, I prefer the Malavita title better — so I was just braising myself for the worst. I’m gonna tell you the truth- I think you guys were expecting too much from him, even thought he hasn’t been truly top-notch since the 90s, and you’ve all been expecting so much from Robert De Niro, when he isn’t doing particularly good… especially with his comedy.

Robert De Niro is in so many violent roles that… I gotta admit that I found him unsurprising as an ex-mob guy. It’s too much of a familiar territory for him and for the audience, that I found it difficult to laugh at his dilemma. Even in Meet the Fockers, it seems similar to an ex-CIA agent who’s having a hard time leaving his days as an agent behind. That works in contrast to Michelle Pfeiffer or Agron herself; the first one with an over-the-top Brooklyn accent that gets drowned in the 90s “Frenchness” – note they use francs and not euros – of the town as she asks the clerk at the mini-market whether they have beurre de cacahuètes, and losing her temper (big time) for being mocked for it.

I don’t understand why people are having a hard time accepting the violent nature of the film when Besson’s films have very violent elements, and nothing in The Family is worse than how a bunch of white people dressed up as superheroes went into a Chinese mobster den to kick the crap out of them in Kick-Ass 2. To top it all off, no characters in here are as annoying as Aaron Taylor-Johnson as Kick-Ass. They also have in common the element of the “tiny girl who gets extra violent.” Of course, Belle is no Hit Girl, but Agron still surprises when she’s about to be boarded by a group of pimpled teenagers who think American girls (or I supposed blonds) put out easily.

While both dad and son seem to live their lives on a day to day basis grounded on survival, Belle wants a chance at a normal life (and goes crazy and a little too clingy), while Maggie just goes out and begs for forgiveness from the priest at the neighboring village. I gotta admit I have always wondered what’s the rule in really horrible acts in the confession booth- one thing is to confess you didn’t confess in your last communion, and another one altogether that your family has murdered so many.

I enjoyed Malavita until its final act began, in which it all just gets messy — from that silly newspaper arrival — but it gets all resolved nicely and as swiftly as possible. It felt so anticlimactic, when it wasn’t supposed to be at all.