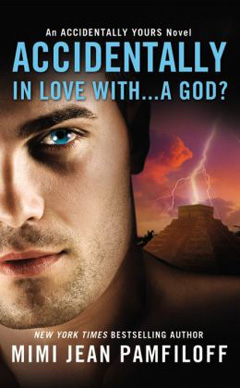 Having not been reviewing for the longest time since the loss of someone close to me, I’ve been reading for fun to get back into the groove of sharing my passion, but nothing ever jumped out at me to share until now. This supernatural novel caught my attention by the cover. A very attractive man stared at me, and I grabbed it gazing at this good-looking man that graced the cover, with (Photoshopped) beautiful blue eyes. I read the back like anything else and laughed. The synopsis alone had me hooked.

Accidentally In Love With… A God opens with Emma Keane — our protagonist — who is seemingly an ordinary city girl with parents friends and a desire for a regular life. So far normal, right? But the thing that has plagued her life since childhood is a male voice, she has come to calling Guy, and only she can hear him. With the disappearance of her grandmother, Guy feels he may know where and why her grandmother was taken. The only way Emma will be able to find out is if she travels to the Mayan jungle to free him from his prison.

With an eagerness to find out where her grandmother is, Emma isn’t too sure she can trust him. She is plagued with memories of his interfering in her personal life, with dates, and the fact that normal people don’t have voices inside their head. Despite Guy being a nuisance, she’s willing to do anything, even risk her life to do the right thing and be rid of him once and for all. She quickly learns that Guy is a god. While having an attraction to his voice for so many years, she wasn’t ready to put the voice to a face until he is finally freed. She’s instantly attracted to him, he’s everything she wants in a man — the height and the sexy, trimmed body, not to mention he’s already naked. She struggles with herself because she does want to fall for Guy as she has been denied any romantic feelings for a man because of his constant chats, and she’s afraid that no man will ever be good enough for her.

Emma is a witty young woman, who doesn’t stand to be told what to do. When Guy, her sexy god, instructs her to not contact her family or they will be killed, she’s not easily persuaded to follow his orders and tries everything she can to protect them. As she fights against Guy’s wishes she begins to learn about the kidnappings of women just like her, the demigods, and why her grandmother was taken in the first place.

Emma is a brilliant and hilarious character from page one. She’s as human as an author can make a character. She comes off a bit flighty (maybe childish) only at first, worried about a date Guy potentially ruined for her, but she comes into her emotions later on as the story unfolds. With that said, I can relate to her attitude — being quick with her responses to Guy or the strong sarcasm she has with other characters in the story. I saw past the strong-willed woman and saw a character who went her entire life not being able to just be herself. She had to accommodate Guy being in her head every moment of her life while trying to live it the best she could. I know she is a confused young woman, putting up a tough, nonchalant attitude that nothing bothers her, even after she is thrown into the jungle to free Guy and the enemies that come with being associated with a deity. But I felt that she just needed a good sob fest and a pint of Ben and Jerry’s. I thoroughly enjoyed this book and look forward to more of the Accidentally Yours series.