Greetings, my fellow geeks! I have finally seen the The Hobbit: The Desolation of Smaug! The movie also had its European premiere! In other news BBC is getting ready with both Doctor Who and Sherlock, and we will get Spider-Man movies until we die. Let’s start!

Lee Pace and Richard Armitage talked about the experience of filming The Hobbit: The Desolation of Smaug. While a taxing job, they both seemed to enjoy it and there were no regrets. Also, they fell in love with New Zealand, and let’s be honest, who wouldn’t?

Bradley Cooper talked about his character Rocket Raccon from Guardians of the Galaxy. And most importantly, what accent this mutant space woodland creature will have?

I liked James [Gunn] a lot and it really was about him, and talking to him about the guy (Rocket Raccoon). I wasn’t familiar with the comic at all, and then I really loved it. I love that character, he’s an incredible character. One thing we debated was he’s seen as a cockney accent sometimes. So, we talked about whether we’d do that, or this other guy [accent] from the city.

Once upon a time, there was this Disney artist who did designs for an animated version of Wicked. Nope, it is not happening… yet. This is just the work of Minkyu Lee when he was studying at CalArts, and he decided to finally share on Tumblr. Here’s Part I and Part II. Now I want it to be real. Dammit, Disney or whoever has the rights, make it happen! 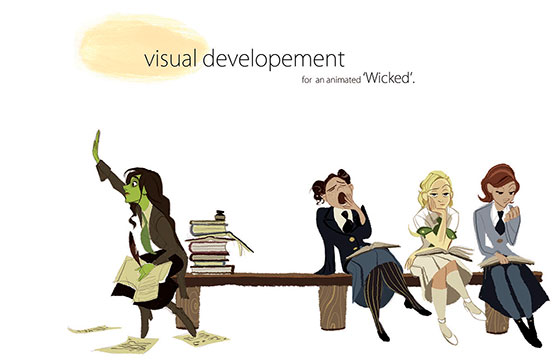 Peter Capaldi might be one of the oldest actors to play The Doctor, but he is still quite younger than the time lord!

On sorta related things (we are still talking about British TV!), yay for Vicious Christmas Special on December 27th! I don’t care how dated that series may feel, it has Sir Ian McKellen and Sir Derek Jacobi, and I find it cute in a mean way~

Next year we are getting a Game of Thrones videogame, and yes it is based on the HBO series intead of the book. Here’s a teaser:

OK, let’s talk Sherlock! There’s been many news this weekend! First, here’s Mark Gatiss saying we shall forget about how Sherlock did end up surviving because the rest of the episode is so cool. Yeah, it may take second place on the viewers minds, but we sure as hell won’t forget. Do you know nothing of your fandom, Mr. Gatiss?

You can’t spend 90 minutes explaining how he did it,” he added. “Everybody’s very excited about it now but I guarantee everybody will forget about it as soon as it’s done because for us [the episode] was about restoring the friendship between John and Sherlock.

Here’s also some new shots from series 3 and official synopsis of “The Sign of Three”! By the way, The Personal Blog of Doctor John H. Watson have been updated again, showing pictures from the first two series from a different POV. And finally, we have a trailer for the new series, and the interactive version included more videos with new scenes and some interviews, which a fan already uploaded to a youtube account.

Remember I showed a picture of the Lupin III live-action movie they are making? Apparently, the idea is to make the characters modern. While I’m kinda sad because I wanted Goemon on his samurai clothes, that makes sense.

There’s no meaning to a live-action film adaptation if you make the setting the same. I intend to change the characters themselves to make them modern. It would be nonsense for Goemon to exist in current society wearing samurai’s garb and carrying around a katana.