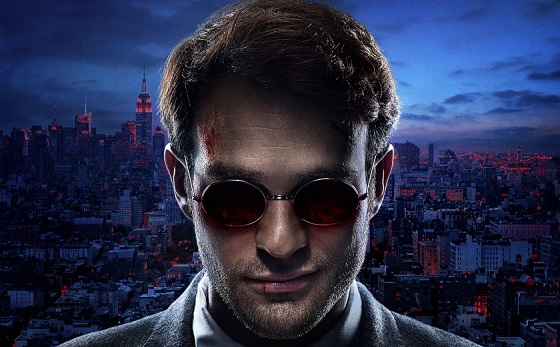 Marvel is really serious about expanding its universe/world through cinema and television as well. Agents of S.H.I.E.L.D. Season 1 was Marvel’s first television outing via ABC and later Agent Carter followed up. At the same time, Marvel and Netflix struck a a deal for showcasing their superhero shows online and for faster viewing. Daredevil happens to be the first Netflix/Marvel show to be showcased, and I must say it was a really smart choice to debut with this series.

For those who don’t know about Daredevil at all (including the 2003 film with Ben Affleck as the titular character), the Netflix series follows the journey of attorney Matt Murdock (Cox), who in a tragic accident was blinded as a boy but imbued with extraordinary senses. Murdock and his best friend Franklin “Foggy” Nelson (Elden Henson — remember him from The Butterfly Effect as Ashton Kutcher’s friend?) sets up their practice in Matt’s old neighborhood of Hell’s Kitchen, New York — somehow not too drastically affected by the New York battle from The Avengers, but it’s still a crime-ridden place nonetheless thanks to the presence of businessman/crime lord William Fisk a.k.a. Kingpin (D’Onofrio) — where he now fights against injustice as a respected lawyer by day and masked vigilante at night.

As Matt tries to work his way under both the lawyer and crime world, there’s two women that also aid him in his life. First, there’s Karen Page (Deborah Ann Woll), whom in gratitude helps out Matt and Foggy in their practice after Matt saves her life in the pilot episode, but she also has a past problem and a connection to journalist Ben Urich (Vondie Curtis-Hall). Second, there’s Claire Temple (Dawson), a nurse who helps Matt when he’s injured.

Unlike every single Marvel project out there since 2008’s Iron Man debuted, Daredevil notoriously stands out for having a no-nonsense attitude and not relying too much of the comedy bits from the films, but there are some laugh-worthy bits here and there to lighten up the dark mood for moments. Most importanly, howwever, Daredevil is presented with showing a very dark tone, used effectively. I know some people complain about superhero films trying to emulate the dark tone established by Christopher Nolan through his Batman trilogy films and not making films fun to watch, but Daredevil has nothing to envy on the Batman franchise in that regard.

The entire cast is really great to watch. Charlie Cox is a far superior Daredevil/Matt Murdock compared to Affleck not only due to great acting skills and presenting an honest human feel, but he’s also benefitted by strong screenplays, action scenes and having a supporting cast with Henson’s Foggy and Woll’s Karen. All three character interact greatly and receive good character development, which makes Daredevil engaging to watch despite the dark tone. While Curtis-Hall worked well as Urich, especially when he interacts with Karen, Rosario Dawson only worked alright because she doesn’t get much screentime and she gets briefly groomed as a sort of love interest for Matt. However, Dawson will be there for Season 2 and she might get character expansion if comic books get followed to the tee.

The real standout of Daredevil is Vincent D’Onofrio without any doubt. Just like Matt, we get to also explore Fisk, his origins and why he turned out to be the way he is. D’Onofrio’s performance is fantastic and he feels alive and grounded to watch. Much like Cox, D’Onofrio is backed by pretty good supporting characters: Leland Owlsey (Bob Gunton), who is a key figure in Fisk’s plans for the city, Fisk’s smarmy right-hand man James Wesley (Toby Leonard Moore); and most importantly, art gallery employee Vanessa Mariana (Ayelet Zurer), who works as a love interest for Fisk and grounds him as a human being.

Like all things, Daredevil isn’t perfect. The pilot episode might annoy some viewers since it presents a good chunk of material already seen in the 2003 film and it does feel a bit repetitive to watch until the final minutes, which later leads a battered Matt to meet Claire for the first time. And then, things start to pick up greatly by the 5th episode and peaks huge when Daredevil goes into Spider-Man 2 territory with Matt and Foggy. Following that point, the series fizzles a bit until the season finale, that ends very well and promises an intereesting Season 2.

Netflix has to push hard for 3 series at the 2015 Emmy Awards in the Drama category: House of Cards Season 3, Bloodline (new series headlined by Kyle Chandler) and Orange Is the New Black Season 2, the latter switched due to the new rules regarding the length for Comedy series. Daredevil belongs in the Drama category and it might not get strongly endorsed as the other 3 series. While it’d be an extreme tough sell to get nominations for the Best Drama Series category and Charlie Cox at the Lead Actor category, I believe Henson’s Foggy could stand a chance in the Supporting Actor category. However, it would be a tremendous crime to see Vincent D’Onofrio snubbed in either the Supporting Actor or even the Guest Actor category. He’s simply fantastic.

Kudos to Daredevil for not only being great to watch, but it’s also a first in Netflix’s programming for being a now-friendly show to blind viewers [1] (the 2003 film is also friendly to blind viewers, in case you didn’t knew that).

Note: With Daredevil [see: Matt and Fisk], Unbreakable Kimmy Schmidt, BoJack Horseman (in lesser doses) and most notably Orange Is the New Black being flashback-heavy, that’s a Netflix trademark, right? However, I expect Daredevil Season 2 to not rely on it that much.