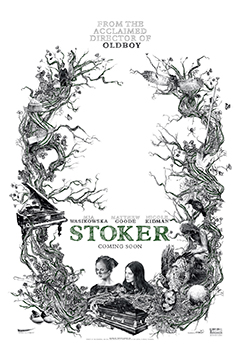 A dead father, an alcoholic and distant mother, and an uncle you’ve never known who appears at exactly the wrong time in your life. These three things don’t add up to a perfect life, but India Stoker (Wasikowska) deals with it all anyway one step at a time.

Those familiar with director Park Chan-wook’s style will immediately be engaged by the lush nature of his English-language debut Stoker. There’s an all too familiar beauty in the bleakness and it unfolds in a slow and poetic manner. India is far from your typical teen girl, always clad in a near-Gothic era wardrobe and armed with hunting knowledge and senses that would put most gruff wilderness men to shame. Even her mother Evelyn (Kidman) has no idea what to do with her, far more preoccupied with the new guest in their house, India’s uncle Charlie (Goode).

Echoes of Hitchcock’s Shadow of a Doubt won’t be lost on anyone who’s seen the film, especially as India begins to take notice in all the missing people since her charming sociopath of an uncle arrived. Her suspicion escalates until she comes to the harsh realization that her uncle is in fact a murderer.

From that point on, Stoker takes off into a far from traditional direction that few will see coming, regardless of its predictable points. Not all that much to brag about, Wentworth Miller’s screenplay is simply a mystery that sets everything up just right and provides a loose structure and jumping off point for Park Chan-Wook to go wild with atmosphere, just as he has in his former films, especially that of Thirst. At its core, Stoker is actually a psychosexual coming of age tale that shakes the ground it walks on.

Just as a flower does not choose its color, we are not responsible for what we have come to be. Only once you realize this do you become free, and to become adult is to become free.

Mia Wasikowska is a wonder to watch. There’s something about her on screen presence that’s ever entrancing, be it in a period piece like Jane Eyre or even the mess that was Alice in Wonderland. Her characters personality reflects both of the people she lives with to a certain extent. The reflection of her mother is the one of the victim, where Kidman seems appropriately aloof in every scene, delivering only one short monologue with a surprising ferocity. India’s uncle brings out the predator within, and Goode plays the charming sociopath to a T, seducing us just as much as anyone in the film. There’s a beautiful duality to the way Wasikowska plays the young woman blossoming into adulthood with these two horrible influences.

For a film full of death, Stoker is absolutely gorgeous to look at and listen to. Clint Mansell’s score, accompanied by a few additional pieces of music, is practically intoxicating, and the sound editing makes every little noise sound like one is hearing it along with India. Even when faced with watching a man being strangled to death by a belt, there’s a certain beauty in the way that it’s shot. Yet India finds something far more than beauty in this tragedy, she finds excitement. That lovely French idiom “la petite mort” has never quite been so apt to describe the way that this film finds pleasure in death and builds up slowly, coming closer and closer to its climax.

Far from perfection, Stoker has a fascinating quality to it that pushes one to want to rewatch and look for more. It’ll be interesting to see what secrets emerge from the midst of all the atmosphere that Park Chan-Wook has created here.