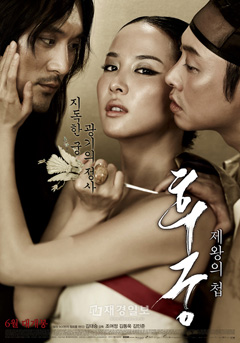 Nobody does telenovela melodrama like South Korea. Sorry, Mexico. Unlike Hong Kong’s disturbingly funny 3D Sex and Zen, which boasted of sex, or Im Sang-soo’s The Taste of Money, which is pure style over melodrama, The Concubine has an intricate undoing of power struggle within the Royal Palace.

Though the poster may lean towards a (rather modern) romantic triangle, which is the primary set up of the story, the core of The Concubine deals little with love, instead entangling itself with sacrifice, suspicion, backstabbing and revenge set in the Joseon Dynasty (1392–1897) in a way that you’re never likely to see on television unless HBO is planning a telenovela. In here, the King’s younger brother, Prince Sungwon (Kim D.W.), is infatuated with the daughter of a nobleman, Hwa-yeon (Jo), despite having at his disposal any other woman.

Hwa-yeon is in love and ready to elope with Kwon-yoo (Kim M.J.), a man of humble beginnings who saved the life of Hwa-yeon’s father. Quickly caught after fleeing, Hwa-yeon gives her freedom to save Kwon-yoo’s life and is taken to the Royal Palace to become one of the King’s concubines who will eventually give him a son. At the request of Sungwon’s mother, Queen Mother Dae-bi (Park), Prince Sungwon lives his life as a respectful brother-in-law to the woman he loves… until the death of his elder brother the King. Then it’s every man (or woman) for themselves.

Though, I must admit, The Concubine lacks some of the visual aesthetics of other period pieces — set solely inside a palace — and the cinematography didn’t bring to life many of the setting’s aspects that made sets like The Housemaid have a life of their own, except for the last zooming out scene resembling of The Pietà [1]. The movie’s strongest points are its storytelling and its characters, which in the end should be the driving elements of a great film. Not to deny that the film was visually pleasing, it had great costume design and sets, worthy of some of the most elaborate period pieces, but these elements didn’t pop, which I guess could have taken away from the main points of the film.

I can’t help but wonder whether South Koreans have some deep inner issues with matriarchs and have now begun to explore them by having Queen Mother Dae-bi — and Geum-OK on The Taste of Money — being the catalysts of everything that takes place in the movie, or maybe it’s all just the result of bringing something that’s common in soap operas and television dramas onto the big screen. All in all, it proves to be great material for both actresses Jo Yeo-Jeong  and Park Ji-Young as thet try to one up each other.

Though some of the material in The Concubine — come on! It IS called “the concubine.” What did you think concubines do? — is quite explicit at times, sex scenes are used in moderate numbers, ultimately avoiding gracious glossy sex scenes for fun, and never disturbing the flow of the plot, which was greatly appreciated. Hollywood, you should probably take one or two things from this.

Overall, I had a little TOO much fun watching this. It barely felt like a 2-hour movie as it was filled with subplot after subplot that kept adding to the tension of the story. And despite not being emotionally attached to the characters, I’m unsure if I was supposed to cry in one of the deaths, I kept giving furtive looks at all the characters doings, like you’re supposed to do when watching telenovelas.

You can get the DVD as a Single Disc or Double Disc on YesAsia with English subtitles.