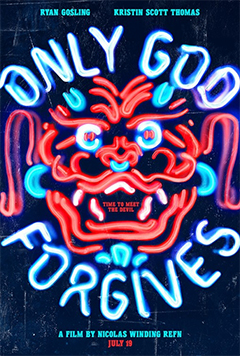 Where Nicolas Winding Refn has, generally, grounded his films in reality to a certain extent, his latest and arguably greatest achievement is so lost in surrealism that the dedication to Alejandro Jodorowsky attached to its closing credits will come as no surprise.

Only God Forgives kicks off as a film populated by the same shadows and blood red lighting that was featured in short bursts in Valhalla Rising. This use of color and darkness is essential to the way Refn’s tale is told, as the overwhelming imagery is a must when you have as little dialogue as these characters do.

Ryan Gosling returns to Refn in a character as silent as his driver, but who contrasts that hero figure to a shocking potential. Julian, a man as emasculated as can be, lives an empty life of drug-smuggling in Thailand. When he discovers that his brother was killed after raping and murdering a young woman, he does nothing to satiate his mother’s (Scott Thomas) pain. She takes matters into her own hands to find the cop (Pansringarm) who allowed her son to be murdered.

However much one would like to think that this is a sequel to Drive, the assumption couldn’t be further from the truth. The story that unfolds between these three characters is told in almost equal parts. Where Gosling plays the impotent and ultimately useless son, Kristin Scott Thomas is a bitch through and through. From her first moment on screen, every word that comes of her mouth is full of vitriol. She breaks her son down constantly, mocking his cock size and calling his girlfriend a cum dumpster, and even in her most submissive moments, she has near full control over her son’s body and mind.

The two performances contrast each other beautifully, with a strong focus on their Oedipal relationship, something that is usually reserved for opera and Greek tragedies. The tragic nature of this is mirrored ever so nicely in the way that Refn presents the story, placing three karaoke songs to split up the film much like a Greek chorus would. Vithaya Pansringarm is the third piece of the puzzle, and arguably the most important, as the cop that unravels this family completely.

Yet even though Pansringarm’s character destroys everything that both Julian and his mother find dear, he is not the villain of this story. Just as the film is shrouded in surrealism, these characters and their motives are all shrouded in one big grey area between the standard hero and villain. Refn never stops his story to explore moral dilemma for more than a minute, but it is clear that Julian, above all else, is troubled by the choices he and others make.

These troubling choices come in all forms, but none so much as the abundant violence that Nicolas Winding Refn’s films are known for. Where Valhalla Rising had a sort of unmitigated bloodlust in its first act, the violence here begins behind shadows. Refn experiments with his camera and shoots from all sorts of nooks and crannies, masking the act of violence until he shows the aftermath. This slowly but surely changes throughout as each act gets bolder and sometimes more gruesome, with an uncomfortable torture sequence and a contained fight scene between Pansringarm and Gosling being the two most memorable.

It is in those scenes and each surreal dream-like sequence that one is forced into understanding that this is much more than your typical crime film. Only God Forgives has the spirit of a horror film lurking in those shadows Refn loves so much and he knows it. When a film has as little dialogue as this, a score can determine just how effective a scene can be, and Cliff Martinez’s work here is some of his best. Few moments are given a chance to be truly silent, as there’s always creeping music in the style of classic horror – menacing organ playing and all – lingering in the air.

Only God Forgives is a hard film to swallow, just as deadly as it is silent. Nicolas Winding Refn’s fondness for violence and sexual imagery is on full display and it is clear that many will find themselves confused and uncomfortable to the point of loathing it. One thing is certain, however, and that is that this is a film made by a man with a great love for pushing the boundaries of film’s boring old traditions to their limits. That in itself makes Only God Forgives a film worth praising.