Taste of Money, The 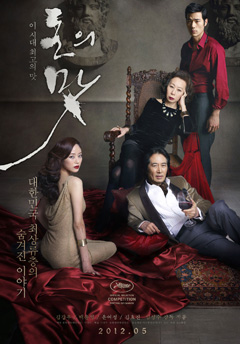 Have you ever watched those Telenovelas that center around the lives of rich people that sleep around with each other and backstab each other whenever they get the chance, all for the money? South Korean director Im Sang-soo’s The Taste of Money — kind of a follow-up to his remake of the 1960’s film The Housemaid — is sort of like that but on steroids.

The style in the film is lush, the amount of money they’re fighting for is unimaginable, there’s more sex, and all the stakes are a lot higher. It should be a delicious recipe, as we follow the Yoon family — a stem of the Baek family, headed by Geum-Ok (Yoon) the matriarch and heir of her father’s (Kwon Byeong-Kil), now stuck in a wheelchair, multimillionaire dealings. Mr. Baek is only taken care of by his malicious female goon Secretary No (Hwang Jung-Min) and the sexy maid Eva (Taylor), who has been having an affair with Mr. Yoon (Baek). However, Mr. Yoon has had enough of this life of dark contempt… or so he says.

Entangled in the middle of this corruption and all the scandals is servant Joo Young-Jak (Kim K.W), who has been vying for his time to rise up the social ladder… but at what price?

I’m just gonna go out there and say it, if you don’t like Telenovelas and their melodramatic love entanglements, you’re not going to like The Taste of Money — EVER. The film is a hyper-stylized version of a telenovela — there’s no way around it. It’s got some great acting, especially from actress Yoon Yeo-Jung and actor Baek Yun-Shik, who inconveniently swapped last names in the movie making it confusing to write about. However brilliant they may be, there’s also some awkward acting from Filipino actress Maui Taylor and Darcy Paquet, who happen to have the most unnatural scenes in English. That may be due to Im Sang-soo’s own directing, and it’s something that always seems to turn up in non-English movies with dialogue in English.

If you love to watch Telenovelas, and especially enjoy those that have matriarch women at the helm of all the dirty dealings, you might love this — and don’t forget to catch The Housemaid either. Yoon Yeo-Jung, as tiny as she seems to be, commands that screen with enough control and a certain vulnerability, especially when she finds out about her husband’s affair and Joo Young-Jak is there. I had to close my eyes because… I just couldn’t look at that. I felt the struggle Joo had to go through from the get-go…  that room filled with such an amount of money. The temptation has a price.

What took away from the film, for me at least, was that I didn’t get to know much about the relatively younger “kids” of the Yoon clan. I know the son, Yoon Chul (On) was kind of a crooked jerk who didn’t even care about his daughter, but considering how Nami (Kim H.J) seems to be a pivotal character in contrast to all these people, I wish I could have known more about her. The ending of the film also felt stretched out, and I would have maybe preferred it ended in the airplane… as funny as that scene was.

Overall, though, even if I wouldn’t recommend this to everyone — I’ve been thinking about it all day long, so maybe there’s something to it that has stuck within my subconscious.