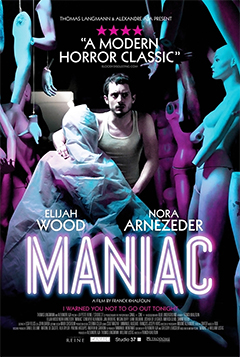 There’s a certain beauty to well-made horror movies that many people don’t tend to understand. You can have all the blood, gore, and jump scares in the world and not achieve a single thing. In his remake of the 1980 cult classic Maniac, Franck Khalfoun lets loose and shows the world just how interesting a remake can really be.

Maniac literally gives us a glimpse into the life of a young serial killer named Frank (Wood), who just happens to have a penchant for scalping women and decorating mannequins. What immediately makes Maniac different from other horror films of the same nature is the fact that almost everything in the film is shown through Frank’s eyes. Khalfoun took a big risk in making a point of view horror film, but it’s a risk that paid off.

If there’s one thing that’s obvious in almost every frame of Maniac, it’s that Frank Khalfoun knows horror and loves it. The first thing that comes to mind when thinking of the way the POV camera moves through the house as we spy on some of these women just before they die is the opening scene of John Carpenter’s Halloween. A minor black and white segment, also involving death, plays off of Robert Wiene’s silent horror The Cabinet of Dr. Caligari. And never did I think that Q Lazzarus’ Goodbye Horses could be used as effectively as it once was in Silence of the Lambs, but Khalfoun impresses with its use in one of the film’s most well-executed murder sequences.

The way mirrors are utilized is particularly notable, always being placed at the right angles to show just enough of Frank’s reactions to the situations he places himself in. The aforementioned scene features one shot of Wood staring up at himself in the mirror while receiving oral sex in which he looks so deranged and nervous that you can’t help but tense up in worry of what is to come.

Practically all that was missing from Elijah Wood’s stellar performance was him whispering those famous lines from Silence of the Lambs, “Would you fuck me? I’d fuck me,” to himself in a mirror. Instead, as we watch a knife move slowly down a gagged and tied-up woman’s back, we hear him uncomfortably utter the words, “I’m not gonna kill you, I’m gonna keep you.” Wood’s had his unhinged moments before, from Lord of the Rings to Sin City, but no one’s ever seen him quite like this and it’s something to witness. Frank is a timid but psychologically imbalanced character, whose oedipal complex runs rampant, and Wood captures it perfectly.

This isn’t to say that it doesn’t have its faults, as certain scenes add absolutely nothing to the film and others are just thrown in out of sheer convenience. Who actually has a butcher knife in their apartment? Probably nobody, but it’s just another part of that eighties charm the film has. Outside of the make-up work and minor over the top low budget horror moments, Maniac is as lush and stylistic as it gets. Maxime Alexandre’s photography has graced plenty of horror films (The Crazies and High Tension to name two), but none have been as visually daring as this.

Not all the credit for Maniac goes to Franck Khalfoun however, as writers Alexandre Aja and Gregory Levasseur show growth from their former works in this fine horror piece. It’s a film that’s high in tension, which coming from the men who wrote High Tension is no surprise, and it’s a big step up from the first horror remake they worked on together which was Aja’s The Hills Have Eyes. Rather than simply focus on twists, turns, and blood, Aja and Levasseur finally embrace classic horror while adding just the right about of the modern French film world to it.

It feels good to say that a remake of an often praised horror film is actually a great work of its own, and Maniac is definitely a great horror film. Just because it looks good and doesn’t rely on gore and blood doesn’t mean there aren’t just as many, if not more, scalping scenes than Tarantino’s Inglourious Basterds though.