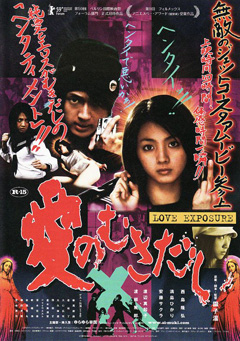 Warning: The film has kind of graphic scenes of violence that range from a school shooting, male dismemberment, and your average Tarantino blood splattering flare, as well as sexual situations that range from pervy panties-snapping, hard-ons, talks withing the AV (adult video) industry… which are all relevant to the plot.

I am allowing a few extra words on this review, because deciding to re-watch a film like Love Exposure requires some dedication. Lasting a whopping 4hrs., if you decide to watch this, you gotta sit back and just let the movie be.

Love Exposure is the epic story of Yu (Nishijima), who grew up in a Christian home praying to the Lord and the Virgin Mary, whom his dear mother cared for the most… until the day she passes away, pushing Yu’s father Tetsuo (Watabe) to become a priest in the local community.

After a failed relationship with Kaori (Watanabe), a newly-converted Christian, Tetsuo becomes distant from his son only ever reaching him when he wants his son to confess his sins. Out of sins, Yu decides to become a pervert taking photographs of women’s panties on the street… but never forgetting the promise he made his mother — to meet “his Maria” which translates into finding the perfect pair of panties.

Introduce Yoko (Mitsushima) and Koike (Ando), as well as Christianity, religious cults, and the AV industry, and you got yourself an epic love story that passes for a violent action flick with some genuinely comedic moments stepping all over those dark times to make you, at least, a bit squirmish.

As a first time experience, Love Exposure doesn’t seem long AT ALL. The hours seem to fly by without you noticing it’s already 3 or 4 in the morning — the mere idea of a boy who wants to sin just because it’s the only way he can communicate with his father is an outstanding starting point. Make him a pervert, introduce him to a psychopath, and let him be attracted to someone he can’t be attracted to — the film can only be Japanese.

The editing in the film is so quick that it leaves you little time to linger on thoughts. However, as a second watch, the film does lose a bit of that marvelous feeling when you feel you’re watching something out of this world. One can think that director Sion Sono could have cut something out of the film to make it less than 4hrs., but then one has to realize that without every detail… Love Exposure wouldn’t be the same epic story.

It deals with so many different issues in such a light way that it’s nothing except entertainment.

Though the story is certainly about Yu and his Maria, the film wouldn’t have that extra punch without Koike and Sakura Ando’s brilliant interpretation. She’s splendidly wicked and tragic as she weaves the invisible net to catch Yu and his family. I feel kind of sick for enjoying her character so much, but I can’t help it — instead of being shocked at what she did, I found myself laughing with her!

Overall, I do understand the people that would hate the film. It has a lot to take in, it’s an investment of time, and if those 4hrs. don’t pay off the way you were expecting, it’s normal to hate something. If you’re already into Sion Sono’s work, or already love “films that can only be Japanese” and you haven’t seen this one – go for it!