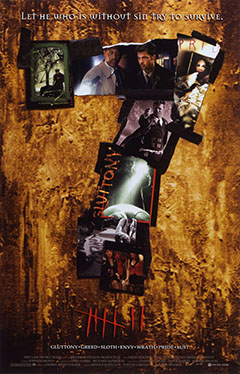 To commemorate its 1000th film review, the YAM Magazine team voted to determine which one of our favorite films should get the honor of being it. However, after what seemed a virtual tie (our lives are filled with them this year), we let our Twitter followers pick; so David Fincher’s Seven won the final voting round ahead of Guillermo Del Toro’s El Laberinto Del Fauno. Speaking of him, he could have directed it, but turned it down along with Denzel Washington, Sylvester Stallone, Al Pacino, Val Kilmer and Christina Applegate, who were offered the main roles. Fincher’s vision, as the director and the cast, who were not the producers’ first option, are truly outstanding. To this day, it still holds very well on repeated viewings.

Seven is a very dark film that follows soon-to-be-retiring detective William Somerset (Freeman) and detective David Mills (Pitt), the latter who had recently moved into the city along with his wife Tracy (Paltrow). Mills and Somerset are tasked with investigating a pair or murders, in which the film’s title comes into play, as Somerset figures out that the murders are not only connected, but also follow the theme of the seven deadly sins. With the first two deaths already labeled as greed and gluttony; it’s up to the detectives to figure out who is behind the killings before it gets much worse.

While the film plays off as a perfect case of whodunit, it takes place in a very grim setting — it seems like it rains in the city very often — and takes its time to explore the mindset of its main characters; with Somerset and Mills being explored a lot throughout their odd couple dynamic as well as the ongoing investigation, which remains very engaging and disturbing to watch throughout. Though, Paltrow’s Tracy doesn’t get explored as much as the male characters given her limited settings, she’s very vital to the film nonetheless, and fares better when interacting with Freeman’s Somerset. Everyone works very well here thanks to Fincher’s apt direction and Walker’s screenplay, the latter masterfully dancing around the seven sins, most notably when Somerset visits the library to learn what he and Mills are going to deal with by reading The Divine Comedy and Canterbury Tales (book illustrations included)… or when the crime scenes are shown.

“Nothing wrong with a man taking pleasure in his work. I won’t deny my own personal desire to turn each sin against the sinner.”

Seven‘s ace in Fincher’s deck is the main antagonist, played in stellar fashion by the man who currently leads Netflix’s House Of Cards (also produced by Fincher) —zing— and it’s the best performance among the cast. The main antagonist dominates the final 30 minutes and leads the film into a psychologically fucked up resolution that strongly pays off everything that has been elaborated. It’s something you have to see for yourself in case you have somehow not seen the film yet.

If there is a big flaw, it is definitely Somerset’s final line, which goes against the grim setting that the film strongly established and softens the finale kind of awkwardly. Despite that, Seven goes down in film history as a game-changer that raised the bar for thrillers. It also had an incredible impact by reviving title sequences — Kyle Cooper, who also worked on the intros for American Horror Story and The Walking Dead — outstanding editing (which got the film’s only Academy Award nomination), the cinematography from Darius Khondji (Midnight In Paris, Amour), and opened the doors to Fincher’s style of directing films, which is something many try to emulate, yet it’s hard to master.