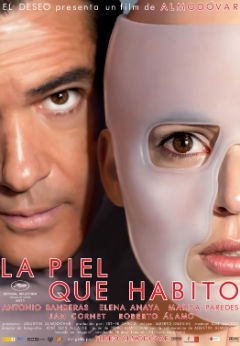 Like the American director David Lynch, Pedro Almodóvar makes films that are truly his own, that are love-them-or-hate-them, but that are almost always masterpieces.

The film stars Antonio Banderas as plastic surgeon-turned-mad-scientist, Robert Ledgard, who is affected terribly by the deaths of his wife and daughter (Suárez) years earlier. Living with Robert is his nanny-turned-housekeeper, Marilia (Paredes) and a mysterious patient named Vera (Anaya).

To go further into the plot would be to reveal the film’s (many) plot-twists, so let’s just say Almodóvar’s description of the film as “a horror story without screams or frights” is just about right. Actually, Banderas stated that Almodóvar is his own genre, and anyone who has seen a handful of his films will know how accurate that statement really is.

It’s been over twenty years since Antonio Banderas has made a film with Pedro Almodóvar, after having starred in a string of his films in the 1980s. It’s good to see them back together; both are more mature at their craft, but both clearly still work wonders together. Banderas, equally as stylish and charming as he is menacing, gives one of his greatest performances to date. Elena Anaya, playing the mysterious patient Vera, arguably the film’s lead, also gives a tremendous, thought-provoking performance.

Like several of his most recent films, Almodóvar plays around with non-linear story-telling, jumping from slightly in the future — early 2012 to be exact — to twelve years in the past to six years after that and then back to the present again. It all makes sense while you are watching it; just don’t try to explain the plot to anyone afterwards.

La Piel que Habito explores many of the same themes that Almodóvar loves: obsession, betrayal, family, sexuality and gender. His exploration of gender constructs have always been a fascinating aspect of the director’s films, and this film definitely questions what gender really means in this day and age of sex reassignment surgeries, albeit in a particularly horrifying way.

Beautifully shot by José Luis Alcaine (La Mala Educación, Volver) and with production design by Antxón Gómez (who has worked with the director on six of his films), the film’s technical aspects, once again, help set the story in a colorful world that seems to belong only to Almodóvar. It is Alberto Iglesias’ sweeping score, however, that truly sets the film’s Almodóvarian tone. Although Iglesias’ melodramatic scores have accompanied all of Almodóvar’s films since 1995, this latest score is perhaps his best.

While the film may not be as taut as Almodóvar’s greatest films, Talk To Her and All About My Mother, it’s still an exceptional film that raises more questions than it answers and lingers with you long after you’ve left the theater.