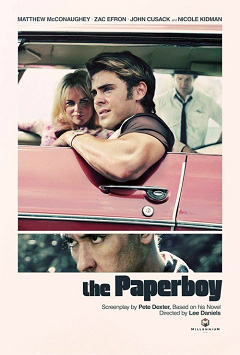 After becoming the critic’s darling with Precious, Lee Daniels returns with a trashy, muddled film that thankfully has Zac Efron in tighty whities to make it at least a little bearable.

The Paperboy tells the story of a newspaper reporter (McConaughey) who returns to his Florida hometown to investigate and cover possible innocence of a convicted sheriff killer (Cusack). His younger brother (Efron) tries to help, but only finds himself falling for the killer’s romantic pen pal (Kidman), who desperately wants to marry him despite having never met him.

Plenty of people try to emulate John Waters’ films and Lee Daniels tries even harder to be as sleazy and wonderful as Pink Flamingos. The result is an experimental travesty that’s one part Southern noir, one part trashy camp, and one part aimless sexual tension between miscast categories. It really makes you wonder how many drugs the people at Cannes were on when they put this In Competition.

Daniels doesn’t quite understand how to maintain a consistent tone within a movie. One minute we’re cringing, the next we’re laughing. Most scenes leave one entirely devoid of any feeling but shame that they decided to watch this. Picture this: Nicole Kidman moaning across from John Cusack rubbing himself off over his pants – this is an actual scene in the movie. It’d be alright if this, or even the hilarious moment where Kidman’s character pees on Efron’s character, actually mattered to the story being told, but it doesn’t.

The storytelling techniques used aren’t much better, I’m afraid, as Macy Gray – who happens to give a pretty good performance as Efron’s family maid – narrates a large portion of the film. It’s an absolute wonder how she knows most of these events that she didn’t participate in, and her narration becomes pretty inconsistent less than halfway through.

McConaughey, who has made an impression with both Magic Mike and Killer Joe this year, disappoints in this role, and would have likely done a much better job if Cusack had traded roles with him. Zac Efron’s first truly risqué movie choice leaves him half-naked most of the film, but demands no real acting. Nicole Kidman is the film’s only saving grace, with a gloriously trashy performance that would have been perfect had the script not entirely let her down in the latter half.